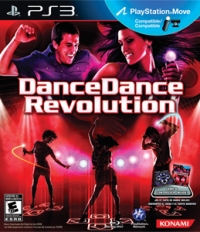 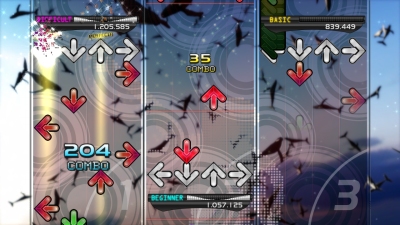 DanceDanceRevolution finally comes to PS3 and Wii, albeit in a rather transformed style. If Konami can marshal the various motion controlled additions into a coherent experience it should be an engaging and challenging addition to the iconic series.

It seems strange to say it, but DanceDanceRevolution is about to arrive on the PlayStation 3 for the first time. Perhaps it took the innovative Move controllers to tempt Konami to release an update for the next game (ed: now current gen) hardware.

The new PS3 Move and Wii versions adopt controls that complement the usual dance mat with arm tracking. The combination of mat and controller means that actions from both the upper and lower body are now tracked through the dances.

The danger here is that it will overload the already complex and demanding Dance Dance Revolution formula. As you track moves with your feet the Move or Wii-mote/Nun-chuck controller directs a ball of light appears on screen and must be pointed at the correct area as instructed. You can also vary on-screen visuals and aesthetics with the gestures that add choreography to the foot stepping gameplay.

The challenge for the game on both Wii and PS3 is to progress from its previous staccato rhythm action gameplay to something more flowing. With Just Dance 2 and a clutch of Kinect dance games like Dance Central doing just that there is a lot more competition in the dancing genre than when Dance Dance Revolution first burst into arcades.

New game modes should be a step in the right direction though. Dance Off has two players taking turns to score highest on a particular dance routine. Club mode is aimed at die-hard DanceDanceRevolution fans, where they can play over and over again in marathon session.

The UK track list is yet to be finalised, but here is the US track list which we suspect will be quite similar (ed: if not identical).

You can support Paul by buying Dance Dance Revolution