Doctor Who: The Eternity Clock PS3 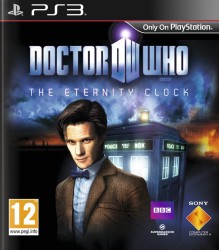 Further reading:
Chris Jarvis
Tintin and the Secret of the Unicorn (PS3) 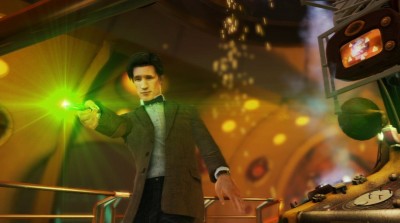 Doctor Who: The Eternity Clock comes to the Playstation 3 and PS Vita as an action adventure, featuring co-op play and a range of Doctor Who's most iconic enemies.

It shows how much technology has come on, that the realtime graphics for Doctor Who: The Eternity Clock look better than most of the effects in the 60s and 70s Doctor Who. Whether or not the unique charm which has kept Doctor Who on our screens can be translated to a game licence remains to be seen, especially with The Doctor's famously non-violent solutions to conflict. Previous efforts have been mixed at best, dreadful at worst.

Doctor Who: The Eternity Clock does look pretty credible and authentic, developed in conjunction with the TV company and featuring co-operative play with one player controlling the Doctor and the other playing as River Song. I'm not sure whether this will prompt fights to control The Doctor, although to be fair if River Song has that cool spinning gunplay attack she used in the last series I may have to call "shotgun".

Familiar enemies will appear, including Daleks, Cybermen, Silurians and new TV baddies The Silence. The gameplay will also feature puzzle solving around a time-travel theme. It's hard to know the materials will translate into gameplay, as the gameplay footage looks pretty similar to Tintin and the Secret of the Unicorn (PS3)'s co-op platforming.

There's a certain amount of confusion over Doctor Who: The Eternity Clock's release. Originally slated for a March 2012 release, it is now listed as April 2012, but with very little of April left it's either been delayed further or will suddenly appear without notice. Also, it appears to be a downloadable title for PSN for Playstation 3 and PS Vita except that Amazon are listing it as a boxed title.

However it comes, it looks fairly promising and hopefully a step in a better direction.

Doctor Who: The Eternity Clock is currently planned for release on the Playstation 3 and PS Vita via PSN shortly.


You can support Paul by buying Doctor Who: The Eternity Clock