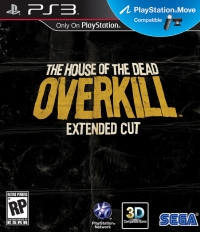 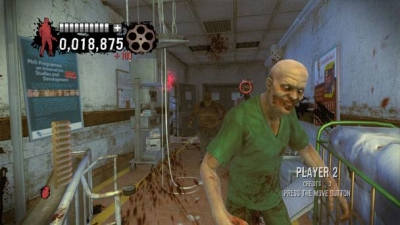 House of the Dead: Overkill - Extended Cut PS3 gives one of the Wii's best shooters an HD, 3D and Move-friendly makeover, hopefully giving an excellent game a whole new un-life.

Of the small outbreak of on-rails horror shooters on the Wii, 2009's House of the Dead: Overkill was probably the best, a smart, swearing-filled gorefest with a strong video nasty feel. By adopting a tone of knowing schlockiness based on the grindhouse pastiches clogging cinemas at the time, Overkill weaponised the House of the Dead series' reputation for cheesiness, making it an asset rather than a liability.

For a Wii game, it looked great, imitating the look of old film (including judders and hairs in the projector), and with a funky soundtrack it sounded pretty great too. It should look and sound even better when House of the Dead: Overkill - Extended Cut comes out for PS3 later this year. Not only will the game be in full HD, it will also have 3D support for players with a suitable television.

The translation of controls from Wii-mote to Move should be seamless, and the rich array of unlocks, extras and minigames in the Wii version should provide plenty of milestones to reward players with Trophies.

As well as giving the game a polish, Sega have also thrown in two new scenarios and a number of new game modes, not bad considering that it was a healthily sized game to begin with.

While House of the Dead: Overkill did reasonably well for an adult-oriented game on the Wii (and on the basis of the swearing-filled dialogue alone, this really isn't for kids), horror-themed games proved a bit of a (pun intended) dead end on that console.

With its over-the-top characters, grotesque baddies and atmospheric Bayou setting, House of the Dead: Overkill - Extreme Edition should fare well on the PS3, a platform far more used to guns and gore than the Wii.

House of the Dead: Overkill - Extended Edition is released on 28 October 2011 for PS3.


You can support Paul by buying House of the Dead: Overkill 3D