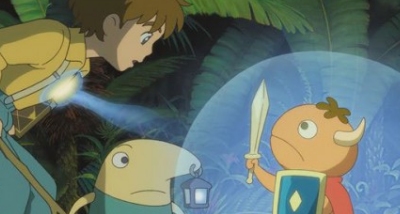 Ni No Kuni: Shiroki Seihai Joo is easy on the eyes as it melds real time and turn based elements in an experience that owes as much to Spirited Away as it does to Final Fantasy.

Coming from Level 5 and Studio Ghibli, Ni No Kuni is a beautifully animated Japanese Role Play Game (JRPG). Utilizing Hayao Miyazaki's distinctive cell-shaded art style from films like Spirited Away and My Neighbour Totoro, it creates a lush detailed world. It is no exaggeration to say the game looks like a playable cartoon - particularly in the more cinematically framed scenes.

After only a few minutes with Ni No Kuni's battle system I quickly began to see its inspirations, a mix of Final Fantasy XIII's active time battle system crossed with the cockfighting aspects of Pokemon.

Controlling a small boy and his pet I was able to explore the environment until I ran across the enemy and triggered an encounter. From here it was possible to yell commands to my pet or switch back to the boy to perform spells and reposition him if he was in danger.

I was only able to perform moves after the boy or the pet were sufficiently rested, in a similar fashion to the recent Final Fantasy games. This mechanic felt considered and tactical, but with a slight pressure to make decisions in timely fashion that is often missing in purely turn based games.

If its moral story telling can hold up to the riggers of such an extended period of exposure Ni No Kuni could be one of the few JRPGs this generation that gets me to pay attention.

With a mix of active time battle systems and pet-combat Ni No Kuni felt comfortable while retaining its novelty and interest. The depth of combat was evident even in a short play through.

But for me the success of the game will hinge not on the action but on the story, exploration and interactions with none player characters.

It certainly looks very impressive and if Miyazaki's well established moral story telling can hold up to the riggers of such an extended period of exposure Ni No Kuni could be one of the few JRPGs this generation that gets me to pay attention. However with an early 2011 release in Japan and no word of a western release yet, I may have to keep my enthusiasm in check.

Ni No Kuni: Shiroki Seihai Joo is released on PS3 in Japaan in 2011, we'll keep you posted about a UK and US release date.


You can support Paul by buying Ni No Kuni: Shiroki Seihai Joo