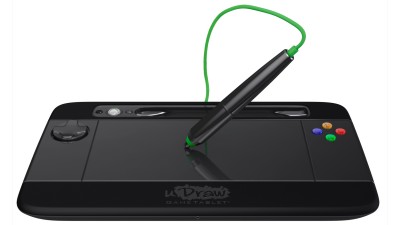 uDraw Game Tablet and uDraw Studio: Instant Artist brings the popular drawing and alternative gaming pad to the PS3 and XBox 360 following its success on the Wii.

The original uDraw Studio provided a great new way to interact with games, providing a drawing tablet and creative environment for players of all ages. In this move to bring the drawing peripheral to the XBox 360 and Playstation 3, it will be interesting to see how much of the casual market these consoles have managed to attract, in spite of their image as core gaming machines.

Having said that, this version of the uDraw Game Tablet looks more like a gaming device than the Wii's clean drawing-tablet design. The new version features built in control pad buttons, doing away with the Wii version's requirement for a docking slot for the remote.

The possibilities for art creation should enjoy the additional power of these more powerful consoles, boasting full HD support for drawing and display. Improvements have been made to the pen itself, improving the accuracy and fine control over drawing. The pad itself has been updated with motion controls and a touch-screen allowing for rotation and pinch-and-zoom controls.

For those frustrated sketchers, uDraw Studio: Instant Artist will also come with painting and drawing tutorials which should aid players in getting the best out of the tablet and learning to draw successfully.

In addition to these creative possibilities a range of games are set to be released which will make use of the uDraw Game Tablet, including content for The Penguins of Madagascar, Spongebob Squigglepants and a great new version of Pictionary. Whether the touch-screen brilliance which moved so well from the Nintendo DS to Wii can be repeated in games for these other platforms remains to be seen.

The uDraw Game Tablet is released on PS3 and XBox 360 in November 2011 and comes with uDraw Studio: Instant Artist.


You can support Paul by buying uDraw Game Tablet