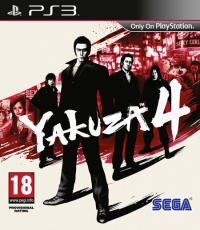 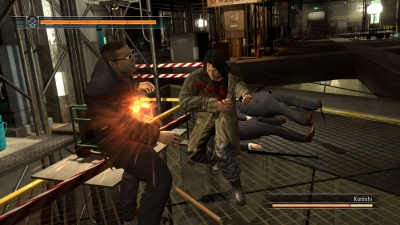 Yakuza 4 PS3 is cut from the same cloth as its predecessor, but hopes to freshen things up with new playable characters, each sporting a unique fighting style.

Yakuza 4 continues the series' brutal fighting and storytelling in the streets of a fictional but realistically rendered version of Tokyo's red light district. The appearance and core mechanics are unchanged from Yakuza 3, although new locations have been added including rooftop and underground areas, which give the city more vertical structure.

The bloody brawls continue with new brutal finishing moves, sending teeth flying and limbs snapping. In addition to Kiryu Kazuma, the main character from previous Yakuza games, you'll spend different chapters as a loan shark, an escaped convict, and an ex-cop. All have ties to the Yakuza and an overall plot, but bring their own stories into the mix. You can expect a highly cinematic experience, featuring over six hours of cut-scenes in total.

The episodic four-character structure will add more structure to Yakuza 4, tightening up the pacing but reducing the sandbox feel. There are less sub-quests this time around, but still plenty to keep you busy. Mini-games continue to be a staple of the series, including arcade games, gambling, sports and a karaoke rhythm game.

Yakuza 4 will be released on March 15th in North America and March 18th in Europe, exclusive to PS3.


You can support Paul by buying Yakuza 4