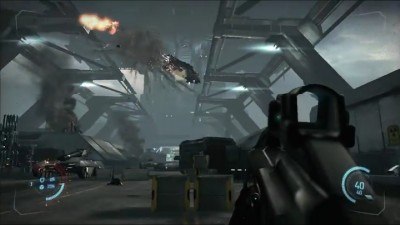 Dust 514 on the Vita is a game but supports your gameplay on the Playstation 3 by making the management and social functions of the game portable.

Dust 514 on Playstation 3 is an ambitious project, attempting to present a first-person shooter which will interact with and impact upon the wider universe of Eve Online. Eve Online is a massively multiplayer online strategy game of many years standing, in which players pilot fleets of ships around a huge universe of planets, vying for corporate control. The planet-based battles of Dust 514 could potentially occur on any one of these planets.

Not only that, but the PS3 version of Dust 514 will be free-to-play and free-to-download. In-game transactions will allow access to more maps, skills and items, but the developers are keen to impress that the system will not allow people to buy their way to in-game success.

It would have been lovely to imagine Dust 514 as a fully-featured free FPS on the PS Vita, allowing the same universe-altering shooting action to spread between PS3 and Vita users. Sadly this is not the case and the Vita version is actually best viewed as a kind of App, providing market transactions, equipment and character/vehicle customisation to be managed from it. It will also allow access to many of the game's social functions allowing you to contact your friends and corporate associates.

This isn't necessarily a bad thing, beyond the initial disappointment. Much of Eve's success was in providing an environment in which players would engage in complex relationship building and developing strategies during offline time, so that they could arrange to get together and work as a team for specific goals when they meet in-game. This app demonstrates the commitment this new game has to recreating that magic.

Dust 514 is currently in development for the Playstation Vita and is awaiting a release date.


You can support Paul by buying Dust 514