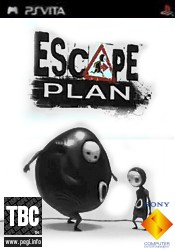 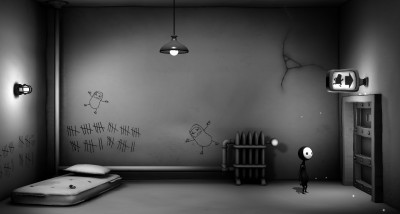 Escape Plan's visuals draw a lot of comparison to Limbo due to its black and white display and the sudden and gory nature of the deaths involved for the two heroes. For me, with the more rounded 3d scenes, it is more reminiscent of Tim Burton's Stainboy or even some of the early black and white Disney cartoons of the 1920's.

Rather than using the front controls of the Playstation Vita, Escape Plan allows you to guide the heroes through obstacles using touch controls, including moving objects by touching them from either the front or rear touch pads. It would seem that the aim in this game is to exercise careful thought and possibly even more careful control in order to succeed.

It's still early days, but from initial viewing the puzzles in Escape Plan seem too overt to draw any direct comparison to Limbo. This is more of a up-front obstacle-course, in which the two characters must be led through a series of deadly traps in order to escape incarceration. Possibly to avoid a mature rating, the characters are reported as being comprised of living balloons filled with black ink - but of course with the monochrome visuals their splattered end at the hands of chopping blades or giant hammers still conveys a distinctly grisly outcome.

The intended effect is comedy, however, rather than horror and it looks as though a comparison to early cartoons may well be founded, with the game levels decorated with oversized boxes labelled "TNT" and hilarious pratfalls. However it turns out it is certainly a unique title for the Vita and promises a rare offbeat treat for a launch game.

Escape Plan is currently planned as a launch title for the Playstation Vita on the 22nd February 2012.


You can support Paul by buying Escape Plan