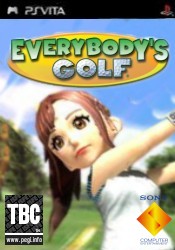 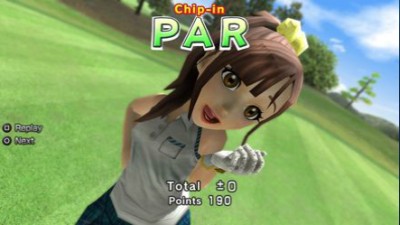 Everybody's Golf is once again a launch title for a Sony handheld, this time coming to the Playstation Vita with touch-screen controls and online multiplayer.

The Everybody's Golf series has always brought a great sense of fun to the Golf sim, with cartoon-style characters and outlandish course locations. But, it has always done so without compromising the core appeal of a Golf simulator. The PSV version looks to be no exception, with a huge range of courses, play styles and quirky characters.

The innovative touch-screen controls allow the player's character to be moved into position swiftly and without the usual awkward tweaking required by traditional controls in Golf games. There are also a range of convenient screen shortcuts to make the process of playing Everybody's Golf faster and more accessible.

Multiplayer is well featured here, too, with online modes offering both a turn-based challenge between players and the option to enter real-time tournaments with a large group of competitors. The game is listed as supporting up to 50 players, so it will be interesting to see whether it takes of as a competitive favourite.

These real-time tournaments are hopefully to be enhanced by the feature to use the PS Vita's motion controls to control the camera and spectate on the action. It will feel like being there without the wind and rain!

Everybody's Golf is currently planned for release on the Playstation Vita on the February 22nd 2012.


You can support Paul by buying Everybody's Golf