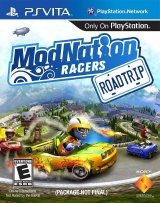 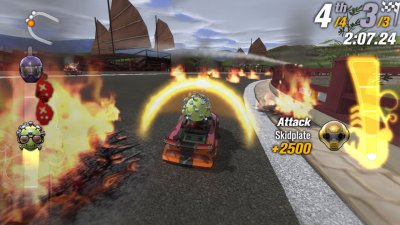 Modnation Racers: Road Trip not only brings the addictive kart racer to the Vita but also allows you to paint the road ahead using the tip of your finger.

Modnation Racers: Road Trip is to kart racing what LittleBigPlanet is to platform games. At the same time it promises fast and frantic racing with speed boosts, weapon powerups and friendly jostling alongside a powerful track editor allowing you to create an endless variety of new tracks - and download those created by others.

With the new touch-screen controls of the Vita, track creation is now easier than ever. The basic track shape can be drawn simply by dragging a finger over the screen to trace the desired route. Also utilised is the rear touch pad while editing the landscape deformation. The rear touch allows hills and mountains to be pressed out of the ground while the front touch allows shallows, lakes and canyons to be drawn in. Within a few moments you will be able to create an entirely new track.

As a kart racer, Modnation Racers: Road Trip also looks pretty solid, with bouncy and fun handling and cheerful characters. There's plenty of choice for tracks as Sony have previously suggested that the 2 million user-generated tracks previously published on the PS3 version of Modnation Racers will be available in the Vita version from launch.

Modnation Racers: Road Trip is currently planned for release on the Playstation Vita on February 22nd 2012.


You can support Paul by buying Modnation Racers: Road Trip