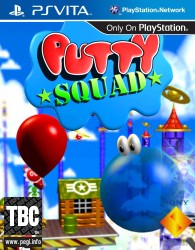 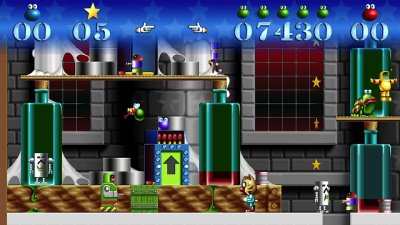 Putty Squad plans a triumphant return in higher definition than ever on the Playstation Vita, and with new content to warm the heart of ageing Amiga and Atari ST gamers.

I have to confess to a deep-seated nostalgia for Putty Squad and I am very excited about the prospect of this new version on the Vita. The original Putty was the first game I ever owned myself when I was bought an Amiga 500 back in the very very early 90's and it is still imprinted in my memory.

Putty Squad is a platforming game with a focus on visual comedy, slapstick and punch lines. You take control of a blob of malleable putty which can stretch, bounce, change shape and absorb items and enemies. It's true to say that the quirky approach to platforming and puzzles are not as innovative as they were in 1992, but it still looks very fresh and the humour is a wacky as it ever was.

The developers of Putty Squad have recreated all of the artwork for the game to make use of the Vita's high-resolution screen. In addition to this, there are reported to be new levels created by some of the original game's designers. Hopefully these can capture the spirit of the original adventure while bringing new ideas.

Putty Squad is currently planned as a launch title for the Playstation Vita on the 22nd February 2012.


You can support Paul by buying Putty Squad