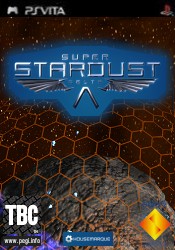 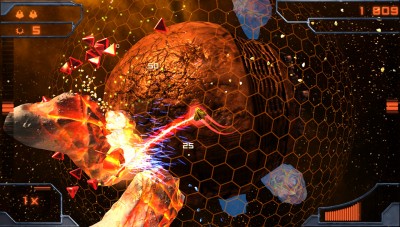 Super Stardust Delta finds a more natural home on the PS Vita due to the second analogue stick and version specific features.

Super Stardust Delta PSV is the handheld iteration of a game that went a long way to define the twin-stick shooter, with movement on one stick and 360 degrees of shooting on the other. It's a phenomenal experience on the Playstation 3 (especially in 3D), but sadly the PSP version attempted to map the shooting controls to the face buttons, which never really proved satisfying.

Thankfully the Vita does provide that much-needed second stick and Super Stardust Delta promises to be the definitive handheld version of this game. The control benefits of the Vita do not stop there, with the rear touch screen used to deploy miniature black holes as a special move.

As well as this, the motion controls have been used, allowing the player to move the camera by tilting the console, avoiding having to lose control of the ship. Additionally the Vita can be shaken to unleash a shockwave attack.

How much these touch and tilt controls add to the game - above and beyond showcasing the Vita's new features - remains to be seen but at the very least if this is faithful to the original Super Stardust HD then Vita owners are in for a treat.

Super Stardust Delta is currently planned for release on the Playstation Vita during 2012.


You can support Paul by buying Super Stardust Delta