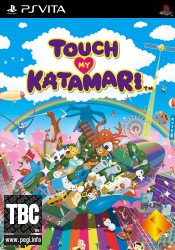 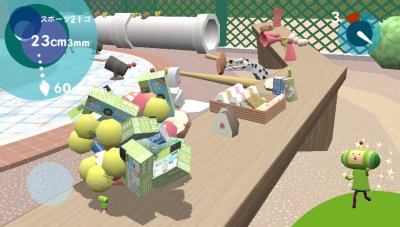 Touch My Katamari is the return of a hilarious object collection series and challenges you to roll up everyday artefacts like never before.

It's been a few years since we last saw the King of all Cosmos binge-drinking his way to infinity and then tasking The Prince with picking up enough pieces to fix creation (Ed: quite a story that). With Touch My Katamari the series returns to its roots with a handheld instalment.

If you're not familiar with the original Katamari Damacy (or follow-up titles Katamari Forever and Beautiful Katamari) the premise of the game is that you are in control of a rolling ball which collects objects to which it sticks. The ball starts off a few centimetres across, picking up batteries and sugar cubes. Once it is larger, you'll find yourself picking up cows, cars, buildings and eventually becoming enormous.

Touch My Katamari seems to share the unique visual comedy and surreal writing of previous titles. Hopefully this will be combined with the addictive object-searching and puzzle-solving which made the original great.

If there is a reason for Katamari's decline in popularity in recent years, it must be down to how stale the simple formula of rolling over objects became. Thankfully, in Touch My Katamari, touch-screen controls provide a new control system as well as rear-touch controls which allow the ball to be stretched into a rolling-pin shape or squashed small to fit through tiny gaps. Hopefully these simple additions will provide the game with a much-needed freshness.

Touch My Katamari is currently awaiting a UK release date on PlayStation Vita.


You can support Paul by buying Touch My Katamari