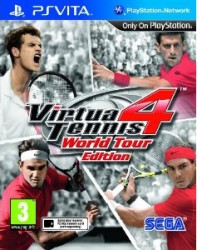 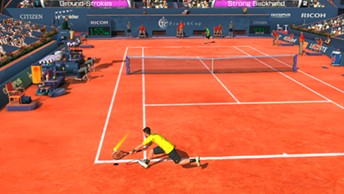 Virtua Tennis 4 comes to the Playstation Vita as well and offers a personalised avatar, online play and even an offline multiplayer mode using a single Vita console.

Virtua Tennis 4 may at first appear to be simply another port of the game which has already been released on most consoles (see Virtua Tennis 4 (Multi)). However the Vita version comes with a number of specific features that make it worth a look.

The Vita version of Virtua Tennis 4 offers touch controls for gameplay and navigation as well as tradition button controls, if that is your preference. Additionally, the multi-touch controls allow for an innovative Touch Versus Match in which two players can compete on the same Vita sharing different ends of a screen. I'll be fascinated to see how this works in practice and it will be amazing to see shared screen real-time multiplayer on a handheld console.

Virtua Tennis 4 also makes use of the Vita's camera to allow you to take a photo of your face. Not only can this be your icon for online matches, but your features can be mapped onto an in-game avatar to create your own truly unique character with which to play.

And ultimately it's still a Tennis games packed with content including 22 real pros, including Federer, Nadal, Murray and Djokovic and dozens of recreated stadiums in which to pursue your dream of becoming a virtual world champion.

Virtua Tennis 4 is currently planned for release on the Playstation Vita on the 22nd February 2012.


You can support Paul by buying Virtua Tennis 4