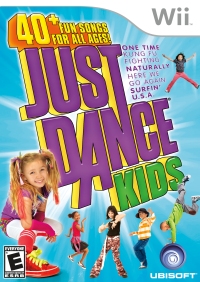 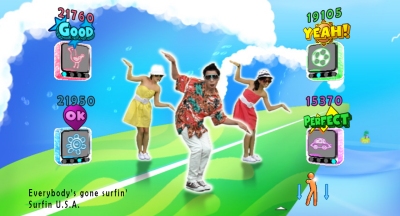 After the success of Just Dance 2 and the approaching Michael Jackson version comes a child friendly outing for Just Dance.

I know, I know, the first two Just Dance games were already pretty family friendly with their sensibly body-shaped dancers and simple active fun. Just Dance Kids takes all this and wraps it around songs that have been written for youngster specifically - crazier dances and novelty lyrics.

There are around 40 new dances included on the disc, each created by choreographers led by children. The kids perform pop and hip-hop re-records as well as favourite TV shows themes - The Wiggles and Yo Gabba Gabba anyone? For the more discerning parents, and the very young in the household, there are also classic kids' songs.

Play mechanics perpetuate from Just Dance 2 with good reason. Players can jump in by picking up a controller at any time as before. The game has been updated to make it better suited for children's birthday parties with a bunch of new modes.

There's a new Dance Party mode where songs continuously play. Then there's a Freeze and Shake mode where you have to stop or shake for extra points. This is rounded off by a Team mode where kids dance together for a combined score team score.

There are also some fitness focused features that enable parents to track calories burned, time played, and which songs are their child's favourite.

This is released in the US and Canada already, and we are waiting for a release date for the UK and Europe.

You can support Paul by buying Just Dance Kids