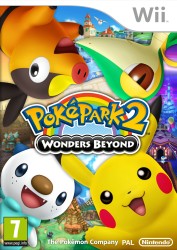 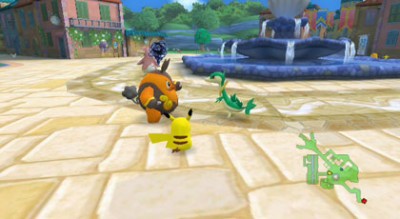 Pokepark 2: Wonders Beyond is a return of the popular Pokemon spin-off for the Wii, this time incorporating the new range of creatures featured in Pokemon: Black and White.

Pokepark 2: Wonders Beyond promises an alternative route into the Pokemon universe for those that don't want to get involved in managing tiny stats and endless training. The Pokepark offers an attractive and open 3D space in which to meet all kinds of Pokemon and take part in rides and minigames. Alongside this there is sure to be an epic side challenge to collect all of the Pokemon in the game.

It incorporates a series of new creatures from Pokemon: Black and White so that just when you thought you had caught them all there are still more to discover.

In this version, you will be able to take control of either Pikachu, Snivy, Tepig or Oshawatt as they travel to new worlds, using their unique abilities to solve puzzles and progress. There are a range of minigames to play from side-scrolling platform sections to rhythm-action dancing sequences. As well as this there are arcade fighting elements, rather than the turn-based battles of a traditional Pokemon game. All of this takes place in a fantastic and imaginative open world.

For me, the biggest appeal of this game is to see Black and White's wonderful range of creatures cast into well-animated 3D models, freed from the tiny DS screen. It will also be good to see a range of activities to call upon. In addition there are offline multiplayer games in which up to four players can compete for the highest score.

Pokepark 2: Wonders Beyond is currently planned for release on the Nintendo Wii on March 23rd 2012.


You can support Paul by buying PokePark 2: Wonders Beyond