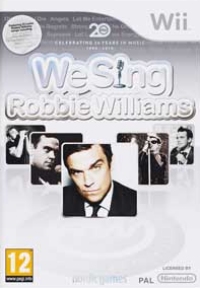 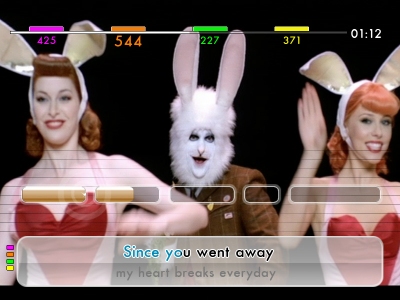 We Sing Robbie Williams adds kudos to the already impressive singing game. Four player modes and fine tuning remind us why We Sing stands out from the other karaoke games on the Wii.

We Sing Robbie Williams spices up the We Sing formula with an injection of the Rock DJ. It continues the series' unique selling point of enabling four players to sing simultaneously. Other titles like Rock Band, Sing It and even Sing Star only offer two tracks to sing at once.

The game can be purchased with a couple of packed in Microphones, but happily also supports any USB Microphones, like those from Sing It, High School Musical 3, Guitar Hero and Rock Band, via its integrated USB hub.

It also supports an array of more hardcore singing features like turning off lyrics and adjusting the singing guide to account for TV lag. Combined with the four player option and We Sing continues to lead the field technically with how to deliver a singing experience.

As well as Solo, Party and Karaoke modes We Sing Robbie Williams offers singing lessons and performance awards for single and multi-player games. Add to this the Party Mode's We Sing, Versus, Group Battle, Pass The Mic, First to X, Marathon, Blind and Expert for a comprehensive package.

We Sing Robbie Williams features 26 iconic songs from Mr Williams each supported with a music video.

We Sing Robbie Williams is released for Wii on 12th November.

You can support Paul by buying We Sing Robbie Williams