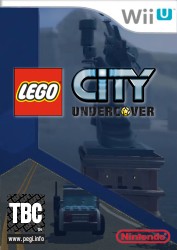 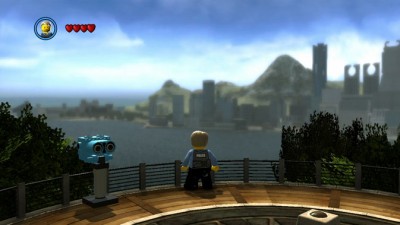 Lego City: Undercover is not just a family-friendly Grand Theft Auto. It elevates the Lego series out of the shadow of movie licences and empowers the Wii U gamepad as a means of wish-fulfilment.

Put simply, Lego City: Undercover will be a system-seller if they manage to live up to the promise of the early glimpses. An open-world crime adventure without the prostitution and extreme violence would normally seem to be a fool's errand, but in the world of Lego vulgarity is washed away by warm humour, corruption represented by a pile of gold studs and violence reduced to a slapstick chortle as minifig pieces litter the ground.

Added to the driving, running and flying action is the different disguises your character can wear. This presumably replaces the method in other Lego games in which different characters have different abilities. Here, the hero will be able to access areas and skills based on their current costume.

The Wii U gamepad will be put to great use. Not just representing a dump for the inventory and map, but mirroring an in-game item acting as your communicator and personal gadget. One scene shows the pad being used as a first person thermal camera to identify hidden criminals. It's like putting an actual Batman gadget in your hands and then giving you a world in which to use it. Wish fulfillment in gameplay doesn't get any better than this.

There have been other Lego games which have strayed away from movie licenses, but these have not been from the incredibly talented Travellers Tales' studios and the poor quality that has resulted in those games is a testament to how well TT know how to deliver. It will be nice to see the imagination of the bona fide Lego games series unleashed from the shackles of a major licence and given an open world to exploit.

Of course Lego City: Undercover should not be hampered by the problems of many open-world games. The genre usually struggles to adapt between vehicle and walking sections, but the Lego games are built upon a foundation of fun platforming and it seems as though the city will be full of great design making exploration everywhere great fun.

The best thing about Lego City: Undercover appears to be that it is far more than an sandbox clone minimised using Lego figures. It is a Lego game, writ large and opened out to take advantage of a whole city and the freedom it will offer players.

Lego City: Undercover is currently planned for release on the Wii U around the system launch towards the end of 2012.


You can support Paul by buying Lego City: Undercover