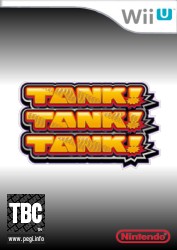 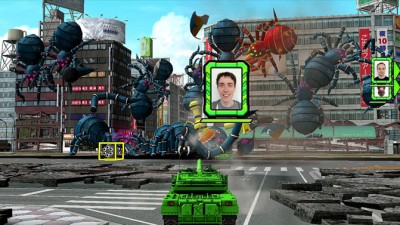 TANK! TANK! TANK! is a multiplayer battling game with a B-Movie atmosphere and some appealing personalisation. This promises to be a frenetic shooting game.

In Tank! Tank! Tank! you will each take control of a heavily armed vehicle and wage war against monsters that are ravaging the city. It looks as though there is a good balance of options between cooperative gameplay and multiplayer deathmatch and the game features the ability to display your photo above your tank, which is a nice option.

Nintendo are currently being a bit vague about whether the multiplayer in Tank! Tank! Tank! will support online as well as offline play. Certainly the photo feature only really makes sense in an online capacity, since in the same room you'll be able to see your opponents faces.

The game will also feature a single-player campaign as well as a multiplayer Kong mode, in which one of you will use the new gamepad to control a boss monster and challenge your friends to try to beat you.

It will be interesting to see if this is released as a full retail product. Compared to some of the other titles in the Wii U launch line-up, this feels a little like a downloadable offering, rather than a fully-fledged shelf release. However, we'll have to wait and see the full game when it is released.

Tank! Tank! Tank! is currently planned for release on the Nintendo Wii U near to the console's launch at the end of 2012.


You can support Paul by buying Tank Tank Tank