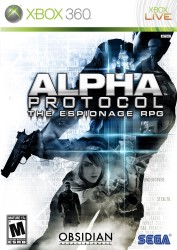 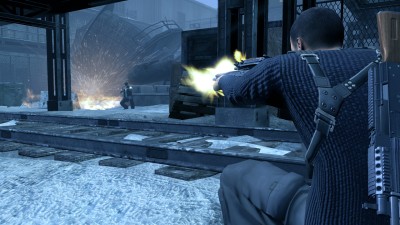 Alpha Protocol rewards those prepared to forgive its obvious faults. The flexibility of the storytelling is as audacious as any game I have ever played.

As a storyteller, I love games which allow me to express myself and carve my own journey through a narrative. It's like a creative experience. However, allowing a player to have a free approach to gameplay is often hard to balance with a detailed plot, especially with a full voice soundtrack.

In this regard, I consider Alpha Protocol to me a masterpiece of design. I was blown away by its ability to work my choices into an intricate and fully voiced story. Different characters naturally and fluidly refer to things you have done, based on a dynamic mix of your actions up to that point and your own attitude towards them in conversation.

I was blown away by Alpha's Protocol's ability to work my choices into an intricate and fully voiced story.

Alpha Protocol is a roleplaying game with a contemporary espionage setting, putting you in the shoes of an agent for a less-than-legal government agency. The gameplay is most easily comparable to Deus Ex Human Revolution, with a choice of skills and pickups which allow you to opt for a stealthy or full-on, lethal or non-lethal approach to completing objectives.

At first it seems limited as a role-playing experience, as you are unable to change the protagonist or even alter his appearance much beyond facial hair and a jaunty hat. But, like an actor playing a character, there is quite a lot of movement for how you interpret that character within the script. The brilliance of Alpha Protocol's dialogue design didn't really hit home until I started playing it for a second time in a different way. Tackling missions in an alternate order and intentionally winding up the other characters made staggering changes to the dialogue script and mission events.

I particularly like that I was rarely made to feel I had made an incorrect choice. In many games is it clear that anything other than a perfect stealth performance is somehow a compromise. Alpha Protocol is a game which punish you for making gut choices and for me this meant that the roleplaying aspect was more satisfying. Like Heavy Rain, there are no wrong choices that lead to Game Over and the end of your own game is likely to reflect the choices you have made throughout.

It's also gratifying as a technical role-playing game. Most skill upgrades are distinct enough to alter the feel of gameplay, so your character's development feels significant. Furthermore, the game awards a series of perks, which are minor bonuses to damage, accuracy, shopping discount, etc. based on milestones like 50 head-shots, or collecting 100% of the dossier on a number of NPCs. This makes character growth feel both on-going and directly related to the way you have been playing the game.

Like Heavy Rain, there are no wrong choices that lead to Game Over.

Alpha Protocol's charm does come with a catch, however. As an action shooter many elements seem a bit unfinished. Graphics are second-rate by current standards, with some unforgivable frame-rate loss and enemy patrol animations which are very poor. Worse still, the AI is abysmal and often when a guard sees a body on the floor, the enemy seem to be instantly alerted to your exact position, even if you are in cover. This can break the stealth aspect of a game.

In spite of this, I would still say that I found Alpha Protocol a more rewarding experience than even Deus Ex: Human Revolution. While the action isn't quite as solid and slick, Alpha Protocol is much more honest about the balance required between stealth and direct confrontation. Furthermore, when Alpha Protocol does force you into a fight, it at least allows you to fight in the style of your character, using gadgets, cover and quick takedowns, rather than Deus Ex's insistence of putting even the most underpowered of stealth characters into a toe-to-toe fight with a boss.

It also scores over Deus Ex for me in the way in which gameplay events change. In Deus Ex, I felt that the minor story elements I changed were signposted rather unsubtly, such as an out-of-the-blue reappearance by a minor character I may have chosen to spare. Alpha Protocol's story events are driven almost entirely by the relationships you have formed with the different characters up to that point and this leads to a much more powerful and much more consistent experience.

It's a real pity that Alpha Protocol's execution isn't more robust. With a bit of polish this could have been an exemplar for how roleplaying games can allow for unique player choice without compromising a well scripted story. I have no qualms in recommending Alpha Protocol, but you will have to be prepared to overlook the game's technical failings to find the treasure within. For those of you that do give Alpha Protocol a chance, you will find an engrossing and personal spy adventure which you can play again and again and nearly always see a slightly different story.

You can support Chris by buying Alpha Protocol