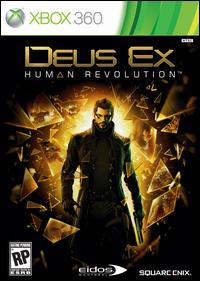 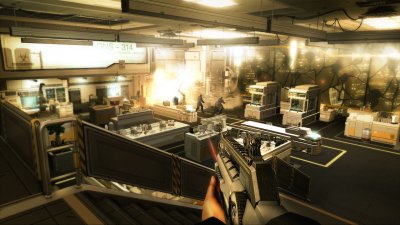 Deus Ex Human Revolution brings true freedom of choice to players by creating a massive world with many possible paths to take.

In the past I've always referred to the original Deus Ex as one of the most effective demonstrations of role-playing in videogames. Role-playing means different things to different people -- but for me it's where the individual boundaries of the character I am playing can be defined, expressed and realised in a given setting. In the original Deus Ex, early levels allowed a great deal of freedom as to how to tackle a problem. I could choose to hack, stealth, sweet-talk or shoot my way into the terrorist-occupied Statue of Liberty visitor centre.

As the game progressed, however, the level of difficulty for each type of approach increased and I found that the path of least resistance was to follow the choices most suited to the skill upgrades I had selected. By the time the final levels of the game came around, the challenge level was so great it was no longer possible to choose any path other than the one for which I had acquired the skills, even though other paths were technically available. To me this seems right as it makes no sense to develop a character skilled in persuasion and subterfuge, only to suddenly switch attitudes and start blasting away indiscriminately.

This, then, is true role-playing in videogames: I have a choice for the path my character will take -- once it has been chosen and seen through to its conclusion, it is not possible for that character to behave in any other way.

This is true role-playing in videogames.

Having now played Deus Ex Human Revolution, I have high hopes that this prequel to the classic Deus Ex will afford the same freedom of expression, twinned with a defining set of behaviours for the character that I choose.

The character is partly defined, once again, by the augmentations added to the cyborg main character, Jensen. Each ability can be upgraded through a series of steps and offer abilities such as improved steadiness with sniper rifles, increased ability to carry more items and the ability to jump higher and further.

There are a limited amount of points available to spend on upgrades and therefore there is no possibility for a player to fully upgrade all of the augmentations available during one play-through. By extension, this ensures that players will need to focus on certain key specialisms in order to reach the highest levels in particular areas and should also encourage replay of the game in order to try the different approaches available. This improves greatly on the choices presented by the original Deus Ex, in which players were led to choose between two available upgrades. The combination of augmentations this time is therefore not limited and a player's character can be more of a unique creation.

Also making a return is the ability to make personal moral choices. This is the second way role-playing can be defined, by having a set of values to which the player and the character adheres. In Deus Ex Human Revolution I found myself presented with a scientist trapped in a lab filled with toxic gas. I was in a place I wasn't really meant to be, so on the face of it I could have left them there to die and got on with my mission. However I chose to stop and help and in return I was given a piece of information which meant that infiltrating the next part of the building was far more straightforward and less resource-costly.

I could have left them there to die and got on with my mission.

All of this personalised action takes place in one of the most lavishly created sci-fi worlds I have seen in a video game. One of the key elements in delivering a play area in which the player has personal choice is that you have to make it big enough to contain many different approaches. Deus Ex Human Revolution has a large play area and then some. Inspired by some of the landmarks movies and novels in cyberpunk history, Deus Ex Human Revolution lives and breathes a science fiction world into which to escape. The music, too, is inspiring and put me in mind of Daft Punk's excellent soundtrack to Tron Legacy.

Deus Ex Human Revolution is a captivating and involving fantasy story exploring the range of actions we are prepared to take with each other and with our own bodies in the pursuit of creating a better world. I'm already looking forward to finding my own individual path through the chaos.

You can support Chris by buying Deus Ex Human Revolution