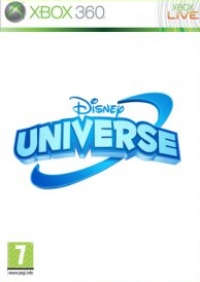 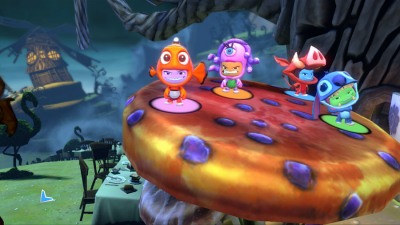 Disney Universe initially appears to be a derivative four-player platformer, but actually provides a rare kind of competitive and co-operative group adventure.

It's fair to say that visually Disney Universe invites many comparisons to LittleBigPlanet (ed: and maybe Castle Crashers?). The diminutive big-headed figures, each wearing a helmet shaped as a Disney or Pixar character, are very close cousins to Sackboy. However, having had some time to see the game hands-on it's a very fresh experience. There's a great mix of group arcade-combat -- each player whacking the enemy with a movie-themed prop appropriate to their character -- and puzzle/adventure sections. It's this variety of group combat and occasional co-operation that sets this game apart.

Not that the whole experience is competitive. It may tell you something about how nicely I play with strangers that I spent a good part of the demo picking up the other players and hurling them off the platforms. Disney Universe is an environment ripe for some good-natured griefing. While there is a strong co-operative element to find all the collectibles and defeat all the enemies, in the back of my mind I was aware that each of us would be scored individually at the end of the round and I wanted that top podium spot.

The designers have catered for this fine balance by dynamically switching between competitive and co-operative play. While LittleBigPlanet has rigidly defined boundaries between these areas, Disney Universe performs a more delicate balancing act. So much so, that the Disney rep informed us that the game actually makes dynamic changes to the level, depending on how co-operatively the players are playing (or vice-versa). These subtle changes balance the challenge ahead, ensuring that die-hard competitors aren't forced to create too uneasy an armistice in order to progress.

Disney Universe is an environment ripe for some good-natured griefing.

The movie-themed environments are fun, colourful and each set an individual atmosphere that complements the comparative richness of the adventure puzzles. The Alice in Wonderland level, for example, features a great array of object-based puzzles which must be examine and experimented with to collect the most hard-to-reach items. It feels much more like a complex world of interactions as opposed to the linear ride which many other four-player platformers often become. The generous camera allows each player quite a free range of movement to explore away from other players.

Due to the co-op nature of the puzzles, it's also a title which should have some good appeal to very young gamers, as the option of having a drop-in player provide assistance is sure to smooth out any tricky passages. The sudden appearance of mini-games also injects variety into the each level and should ensure that there is plenty to keep players of all ages entertained.

The biggest shame is that the game only supports local multiplayer -- requiring four controllers.

The biggest shame is that the game only supports local multiplayer -- requiring four controllers. While this lends the game to some fantastic sofa-banter, it does suggest that for many players the full four-character experience will be very occasional. An online mode would have allowed for group play on-demand. Nevertheless, it's still a blast, even in single- or two- player and it's definitely a title of which we're anxious to see more.

Disney Universe is currently due for release on XBox 360, PS3 and PC/Mac in the Autumn of 2011.

You can support Chris by buying Disney Universe