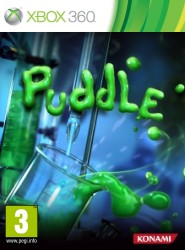 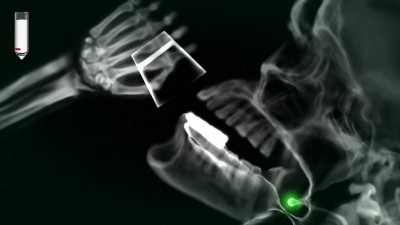 Puddle comes across as equal parts escapist fantasy and geekdom-fuelled science lecture. The basic premise is simple enough: rotate the side-scrolling world left and right to allow a fluid to travel through a maze using a mixture of gravity, momentum and mass to leap ramps, activate switches and avoid traps.

Featureless liquid wouldn't be most writers' choice for a central character in a drama, but it's the cleverness of the scenario which turns what may otherwise have been a dry physics puzzler into a daring escape adventure. Whether trapped in a heater, rocking back and forth to raise the pressure and create an escape route or creeping along a ledge slowly and carefully to avoid a nitroglycerin-fuelled explosion, there is a natural drama created which I found gave me a thrilling sense of impetus for my journey and a rewarding feeling at each goal.

There is a natural drama created which I found gave me a thrilling sense of impetus.

You'll need a good mix of approaches in Puddle to win through. At times it feels like a racing game, travelling as quickly as possible around bends and over jumps to reach the finish line with as much remaining fluid as possible. Other times the game will test the accuracy of your control, challenging you to jump a bubble of flammable liquid between two red hot lasers.

The plot - sort of - tells the story of a cupful of water gradually making an initial escape before heading into different environments and changing its own form along the way. Each different state brings advantages or disadvantages, such as the weed killer state with removes plant-growth obstacles, or the petrol state which is easily flammable and must be cooled frequently to dowse flames.

It's a clever way of introducing different places in which fluid mechanics are significant, such as a drainage system, a rocket motor or even the human body. More than that, it's extremely clever writing, because it allows the game to deliver different environments for each level without falling into the usual grass/ice/fire world cliches of most platformers.

The art style isn't always very consistent between environments. I actually can't decide whether this is criticism or praise. For example the lab levels take a very photo-realistic view of the liquid and environments, but the following outdoor level appears to be slightly more cel-shaded and cartoony. Later levels become even more stylised. On the one hand the changing style rankles a little, particularly if a newly-introduced style is less to your taste. Conversely, it seems that choosing an art style which is sympathetic to the subject matter of the level seems highly appropriate and probably something which more games should consider.

I can definitely recommend Puddle as a treat for the senses.

That said, regardless of which style Puddle is aiming for at any given moment it is almost always very beautiful. Despite the scientific inspiration, the tubes, switches and pipes are rendered with a painterly eye and a love of colour and contrast. If you're starting to tire of the similar tones in which many modern games are drawn then I can definitely recommend Puddle as a treat for the senses.

Be warned that Puddle can be very tough and occasionally frustrating. The stringent attention to fluid dynamics means that your trail of liquid will often break up throughout the route. The game makes a good effort at managing the camera for you, but at times it's hard to figure out which particles are still considered part of the player and which have become acceptable loss. The game allows for a small number of level skips, in recognition that many players will come really unstuck in a few levels. But these are extremely limited and furthermore goad the player by labelling these "whines".

Puddle is a much more original and fresh title than its initial premise suggests. I have seen liquid-pouring puzzle games before, but never one which takes the concept and finds as many ways to wring gameplay possibilities out of the characteristics of different substances. Additionally, the very last thing I expected to find was a escape drama of such gripping tension and scope. Puddle is a treat indeed!

You can support Chris by buying Puddle