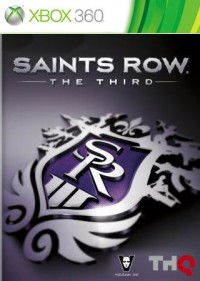 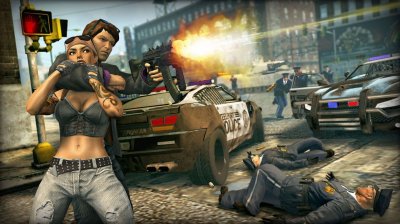 Saints Row the Third is by turns shocking, adult, hilarious and boisterous. It promises to raise the bar for pure fun in the open-world sandbox genre.

"Welcome to the biggest ultimate guilty pleasure in videogaming" says the presenter in our behind-closed-doors presentation of Saints Row The Third. Within moments of the demonstration starting its easy to see what he means.

The player character walks down a street in a fairly familiar-looking open world city, albeit one which is more colourful that the gritty urban sandboxes we are perhaps used to. Suddenly he attacks a passer-by for no reason, other than sheer entertainment. However, rather than the random thuggery of GTA, this street attack is pure pantomime. Exercising over-the-top wrestling moves, he grabs the pedestrian by the neck, spins him around and face-plants him into the pavement.

There is a ripple of laughter from the assembled crowd. As hard as it is to explain, there is a kind of joy about the entertainment which Saints Row the Third has on offer. At face value it is an incredibly violent and adult game, but somehow everything that is delivered, whether it is the responses of the characters or even the vibrant and colourful nature of the city itself seems designed at all times to raise a smile.

It's the videogame equivalent of Family Guy.

As the demonstration continues, we witness the player clubbing passers-by with a weighty sex toy, sucking pedestrians into a giant cannon and firing them as projectiles over the horizon and even taking off in a VTOL jet and flying around the city, able to rain down air-to-surface destruction on the city below.

It's the videogame equivalent of Family Guy's intentionally overlong fight sequences. Ideas so outrageous in their presence that all one can do is laugh at the ridiculousness of the whole affair. To give another example, one mission sees the characters robbing a bank. Since the street gangs of the previous titles are now celebrities, there is a feeling of nonsensical hero worship from the victims of this crime. One hostage gets the masked robber to sign an autograph, while a police negotiator in the action fallout of the assault calls out "this is the police. Give yourselves up. My son really wants to meet Shaundi..." During the raid a security guard struggles with an attacker and is shot with a shotgun, causing him to be hurled through the air and crash into the base of a statue, which topples over and trashes the room.

What is also striking about Saints Row the Third is the quality of the action set pieces. In games there is often a choice between a tightly scripted third person action game, like Uncharted, or the freedom of a non-linear game in which the emergent action takes priority over spectacle. Saints Row the Third seems to manage this balancing-act perfectly. It has all the freedom and emergent action of an sandbox title, while the story missions themselves are as finely directed and elegantly scripted as the best linear shooters.

We witness the player clubbing passers-by with a weighty sex toy.

It's a fairly safe bet that Saints Row The Third will generate its own fair share of controversy upon its release and this is certainly not a game which anybody but an adult audience should engage in. However it's extremely difficult to judge it as a harmful, dark or unpleasant game. Nearly every element of the game I have seen so far seems designed to raise a smile or at worst a feeling of stunned amusement.

You can support Chris by buying Saints Row The Third