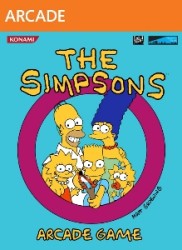 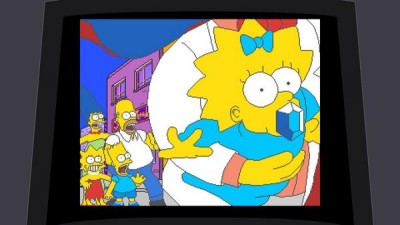 The Simpsons Arcade Game lovingly updates a classic street-brawler with fun support for four players. What it lacks in the show's clever satire and humour it makes up for with character and faithful art style.

It seems like a long time since The Simpsons really grabbed attention and surprised me with its irreverent humour and cutting wit. These days I find that Family Guy's edgy dark humour makes me laugh more often but, looking back, The Simpsons approach to satire was much less scattergun and more cleverly aimed and avoided losing the humanity of the characters.

It's also a little hard to remember when The Simpsons branding and merchandising was on almost everything, in danger of making the series the kind of low-cost cash-cow that the show always lambasted. Thus it was that when The Simpsons appeared in this arcade game it felt like a slightly lazy shoe-horning of the characters into a format which they didn't fit and didn't provide an outlet for their unique style.

Slapstick humour in the animation tries to keep the game on-topic to the source material.

It looks initially very promising, with graphics that really capture the spirit of the show. Thankfully this updated version delivers the graphics and sound in their original format, presented in a their original pixel-art style rather than attempting any kind of horrible blurry up-scaling. For some reason the entire game is framed throughout with a mock arcade-machine surround, which will either be to your taste or will grate very quickly.

Visually, it really does look the part and there are a few instances of slapstick humour in the animation which tries to keep the game on-topic to the source material. Unfortunately, while it occasionally delivers on the visual comedy, it lacks the characters and satirical jibes which made the show such a classic. Perhaps its hard to imagine how these would translate to gameplay, but certainly the backgrounds seem devoid of action and could have been used for clever references.

Interesting characters which could really have leaned toward hilarious game sequences are barely given screen time either, such as Itchy and Scratchy or the Comic-store Guy (although there is an amusing Achievement "Best Score Ever" which echoes his catchphrase when you reach 250 points in game). Unfortunately this is probably a legacy of the original game appearing only after the show's first series and probably a reflection that the show had yet to get into the stride of its finest material and characters.

Narrative setting aside, it's an extremely entertaining arcade game.

Narrative setting aside, it's an extremely entertaining arcade game, especially in the four-player mayhem which, in this updated version, allows for online co-op. The characters have a fairly basic range of moves, but figuring out exactly which approach works best for each enemy is half of the fun. Along the way various object can be picked up and used as additional weaponry, such as slingshots and beer cans. In multiplayer mode, characters can team up to attack in pairs, with the results unique to which pairing of characters are involved.

Ultimately it isn't the best homage to The Simpsons which fans could hope for, but it is an extremely enjoyable one- to four-player street brawler, which favours slapstick comedy over ultra-violence. It's a pity that this title harks back to a time when videogame tie-ins only really felt they had to package an existing game format with characters from a licence. But, thankfully, it is a good thing that The Simpsons Arcade Game is based on some very solid gameplay. That it is combined with artwork, animation and sounds which are so faithful to a great series is an added bonus.

You can support Chris by buying The Simpsons Arcade Game