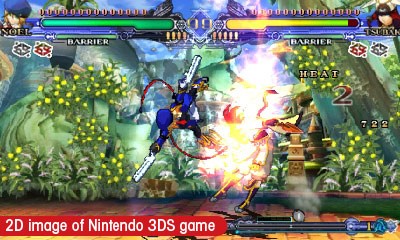 BlazBlue: Continuum Shift 2 brings the anime brawler closer to 3D, but fails to bring my lapsed enthusiasm for fighting games out of retirement.

It's been a long time since I played and loved a fighting game. For me the last truly enjoyable experience I had was Soul Blade on the original Playstation. I loved the pace of the combat which allowed for strategic battles and ensured that opponents who used relied on button-mashing or a single powerful move were kept at the bottom of the heap where they belonged. In recent years I have fallen away from this genre entirely.

I found the stories themselves full of jargon and extremely hard to follow.

Presented with BlazBlue: Continuum Shift 2 I was immediately won over by the beautiful Manga-style artwork. So, with my own love of narrative in games, I plunged into the story mode to see if this could win me back to fighting games. I was impressed how each character was distinct and well visualised, avoiding the generic staples of many fighting games. Each fighter also has their own story thread which leads to a variety of challenges.

Sadly, the stories themselves were full of jargon and I found them extremely hard to follow. What I've seen suggests that to fully appreciate the plot you may need to have played (and understood) the first Continuum Shift.

Away from the story mode the game didn't improve. In a fighting game, I like to be able to follow the onscreen action, make meaningful blocks and pull off intentional combos and moves. I felt that the beautifully designed characters became a flickering mess on the small screen with too much extraneous detail to make out what they were doing.

The pace of the action is too fast to approach the fighting with any technique other than button mashing and as such I found I was robbed of any satisfaction from victory or loss. As in the my story there is no Martial Art; the fighting is simply about hitting the opponent quicker or harder than they can hit you, rather than trying to master a weakness in your opponent's defence. For me, a good fight should be a narrative story in itself, with the advantage moving back and forth between the two participants. No-one really wants to see a KO after six seconds of one-sided action.

This game is to a true 3D experience what Victorian Paper Theatre is to Avatar.

In BlazBlue: Continuum Shift 2, the 3D is limited to providing a gap between the layers of 2D parallax in the background. If the 3D adds anything at all, it lifts the busy artwork off the noisy backgrounds, providing a much-needed clarity to the action. However it feels like a 2D game which has been ported into 3D with little consideration for the use or importance of the added depth. This game is to a true 3D experience what Victorian Paper Theatre is to Avatar.

Additionally, forcing the player to play using the D-Pad alone only highlights the fragility of this control on the 3DS. Whether that is the fault of the console or the game's design, the result is an unplayable fighter. Combine that with the lack of any kind of online multiplayer this title really has little to offer.

Having not played a fighting game for many years I was concerned that I had missed the point or was simply out of touch with the genre. Like buses these things must come along in pairs as after waiting ages for one I found myself reviewing two of them, side by side. While my thoughts on Dead Or Alive: Dimensions (3DS) are best kept for a separate piece I can summarise by saying that everything I found at fault with BlazBlue: Continuum Shift was validated by my experiences with a far superior fighting game.

It's a pity that BlazBlue: Continuum Shift isn't more entertaining, because the art style and the distinctive characters lift it well above the competition and the Manga-style storytelling had me really wanting to get on board. However, the cluttered gameplay, unsatisfying combat, bewildering plot and lack of consideration for the 3DS' distinctive features left me more than happy to put this game away for good.

You can support Chris by buying BlazBlue: Continuum Shift 2