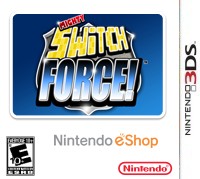 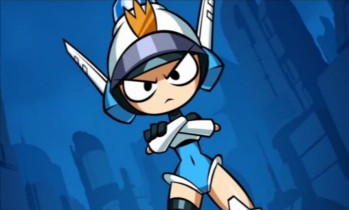 Mighty Switch Force is a platforming game in which you take on the role of a futuristic cop recovering a group of escaped female prisoners. In their escape they have also called upon a legion of hideous monsters to impede your progress.

The innovation here is in the form of blocks which can be manipulated, with a simple button press, between the foreground and background of the action. Here, the 3D is used beyond a cosmetic effect to show you the position of the blocks in relation to your character. As the game progresses, different combinations of blocks provide a puzzle element to the platforming which complements the running and shooting nicely.

The 3D effect does lift the foreground action nicely off the background.

In many respects, there is nothing here which isn't as equally enjoyable with the 3D slider turned off as it is essentially a 2D platformer with added 3D effects. True, the depth adds to the feeling of connection with the action, but I found that playing in 2D was just as effective based on the shadowing of the blocks as they moved into the scenery. However, the 3D effect does lift the foreground action nicely off the background and the game's creators have made fun use of the depth effect (especially when you get squashed by one of your own blocks for the first time. I won't spoil the surprise!).

The puzzles are very well designed and are satisfying to overcome. As a writer I always enjoy the feeling when a storyteller or director has such a good understanding of the audience that he or she can anticipate their responses and manipulate them. There were a few instances in Mighty Switch Force where the flow of the action tricked me killing myself, as in my story. In this case I didn't feel cheated by a cheap kill, actually I was entertained by the trick in itself as my hand was not in any way forced.

For my taste there isn't a lot of narrative in which to become engrossed. I found this a pity, although what little story is communicated is an example of how to do a great deal with very little. Are the escaped female prisoners now equally trapped by the monsters they released as a distraction? Do their demure behaviours seem at odds with the heavy-iron nature of their criminal restraints? Is any of this subtext even intentional on the part of the designers, beyond finding a more politically correct reason for having squealing buxom females in need of prompt rescue?

As a budget diversion, Mighty Switch Force is a highly entertaining romp. It's not a long game and I was able to rattle through the 16 levels included in a couple of hours. There is a target time for a speed run of each level which provides some replay, but the end of the unlocks a weapon which makes sailing through the levels quickly much more straightforward. While the quality is certainly worth the £5.40 price tag, this won't keep you entertained for long compared to the some of the other treats in the 3DS store.

As a budget diversion, Mighty Switch Force is a highly entertaining romp.

Where Mighty Switch Force excels is in the artwork and animation. Compared to the developers' previous efforts on the DSi, this game revels in the higher resolution of the 3DS screen, drawing its characters in bold strokes. So much character and humour is communicated through the animation it makes up for the game's other shortcomings.

Mighty Switch Force is a tiny bright gem of a game, which is rare in that it uses the depth effect to enhance gameplay. It's certainly worth a look, but I couldn't help but feel that I wanted to see it developed into a longer and more varied adventure.

You can support Chris by buying Mighty Switch Force