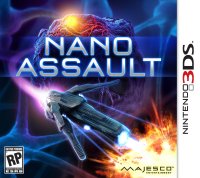 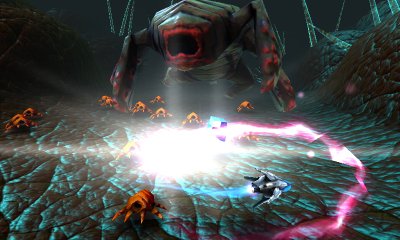 Nano Assault makes great use of the 3D display of the Nintendo 3DS and provides an addictive shooter experience on the move.

Nano Assault is the follow up to Nanostray 1 and 2, a pair of sleeper hits which provided some good old-fashioned bullet-hell style shooting on the Nintendo DS. Like Ikaruga these games revelled in a classic 2D scrolling style, but utilised 3D models and a dynamic camera.

The adventure begins you travel inside a living body to rid a victim of the damaging affects of a deadly and intelligent virus. In Nano Assault, Majesco Entertainment move things to 3D and make some interesting changes to the shooter, while retaining the feel and pace of a classic arcade shooter.

Rather than a scrolling screen, each of Nano Assault's 20+ levels are based on a rotating world (a little bit like Super Mario Galaxy, only with spaceships and missiles) which represents a living cell which must be cleared of virus particles. Once all of the enemies have been cleared in a particular arena, the player can then progress to another part of the body.

It retains the feel and pace of a classic arcade shooter.

The rotating cells look excellent in 3D -- in fact, if you have had the chance to witness Super Stardust HD on the Playstation 3 on a 3D display, the effect is very favourably comparable -- and there are some great visuals as the enemy blast apart and spray wreckage in all directions. The overall quality of all of the graphics and animation is extremely high.

The second style of gameplay arises as you travel around the body. These are presented from behind your craft as it flies through blood vessels and tubes, all the while coming under attack from enemy ships. The 3D effect is, again, extremely effective and provides a fantastic feeling of speed and immersion.

The action is fast, frenetic and fun but if there is one small drawback it's due to the 3DS console itself. Nano Assault allows the player to fire in cardinal directions (north, east, south, west) using A, B, X and Y and in-between by holding two buttons together, but it's very hard to judge when moving and sometime feels a little counter-intuitive. I found myself plumping for a fire direction with which I felt comfortable and moving my ship to line up the shots. Ultimately, Nano Assault feels like a twin-stick shooter desperately seeking the second stick which the 3DS does not provide. Alternatively, perhaps the onus is on Majesco Entertainment to get a little more creative with the existing analogue stick, touch screen and maybe even motion controls to provide a more intuitive aiming method.

For some players, however, this will be missing the point; adapting to a quirky control system in the face of a shower of incoming bullets is the challenge many arcade shooter fans will be seeking.

I've often said that there's a difference on the 3DS between the games which use the 3D to provide depth and scale and those which create an almost tactile presence for on-screen objects. By combining the rotating-world levels and the tunnel shooting environments, Nano Assault successfully marries the two approaches brilliantly.

Nano Assault is due for release on the Nintendo 3DS towards the end of 2011.

You can support Chris by buying Nano Assault