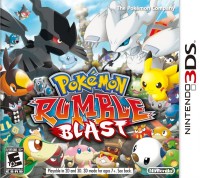 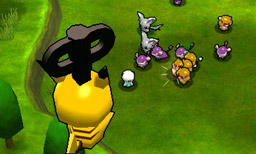 Pokemon Rumble Blast neatly misses the point of what makes the Pokemon game series so compelling, but provides an entertaining arcade romp and a wish-list for future Pokemon quests.

Pokemon Rumble Blast isn't a terrible game, but the Pokemon series casts very long shadows and this falls far short of the high expectations set by the main games. More importantly, it fails to appreciate and replicate the elements which make a Pokemon game so rewarding and addictive. Where Pokemon Black/White revels in the companionship and growth of a few select creatures, Pokemon Rumble Blast takes a scattergun approach to Pokemon ownership which is less satisfying.

For example, the game begins by presenting the player with a single, ever-popular Pikachu. However, within the first two levels this tragic mouse is no longer powerful enough to deliver any kind of impact and will be abandoned, never to be useful again for the duration of the game. The creatures you collect do not level up or gain new skills. It's akin to treasure in a roleplaying dungeon crawler. Early on, that +1 dagger seems pretty shiny but by the end of the quest you will have a bag full of them and can't throw them away fast enough.

It fails to appreciate and replicate the elements which make a Pokemon game so rewarding and addictive.

The problem is that the game quickly becomes an arms race. It's an appealing enough quest to search for creatures which have a great combination of moves and good power. But these remarkable individuals quickly become obsolete. Within a few levels of the game they no longer have sufficient power to be effective and will be discarded in favour of a less ideal or less interesting creature with a higher power rating.

All of this means that the careful selection and training of a balanced Pokemon collection - which is surely the heart of a great Pokemon title - is swept away in favour of selecting the most recent high-powered acquisitions. The subtle interplay of Pokemon type matchups, such as Fire over Water and Ground over Electricity is lost and it simply becomes expedient to blast away with a high-powered move of any kind, using player skill and reactions to avoid damage, rather than any ability of the captured Pokemon. There is too much focus on using recently-captured Pokes and it is impossible to build up and care for a unique team.

"Never mind the quality, feel the length" is the adage which most effectively applies to Pokemon Rumble Blast. By the end of the second world, I found I had a selection of over 160 Pokemon. Usually only the top ten most powerful specimens are of any use at any given moment and the chances of these having move types which are relevant to the current challenge are slim.

Sadly, this philosophy of bombarding the player with a great number of indistinguishable features extends to the overall design and after a few short levels I quickly felt that every single map was largely the same, only with different graphics. There's no variation in approach here; all you are required to do is march from one the start of the level to the end and then fight a boss creature (all of whom seem to have the same moves). I'm afraid to say that Pokemon Rumble Blast's appeal will almost certainly wear off before it runs out of content to throw at you.

As a story and narrative experience it is also extremely lacking. Were I to be tasked with converting this game to a novel, I doubt I should even ask for a second sheet of paper. For some reason the Pokemon themselves are transformed into windup toys in a toy-shop - which is surely a bit to close to the merchandising truth for most people? - and if there is a good narrative reason for this device, well, I didn't stay to the end to find out.

It's a pity, because taken purely as an arcade shooter, Pokemon Rumble Blast is actually fairly addictive and in spite of my disappointment I would be quite likely to dip into it occasionally for a short burst of action. It's almost like a vertical shoot-em-up with way too many levels. In addition, seeing the Pokemon finally given a decent 3D representation on the handheld is exciting and the fresh representation of familiar battle moves is definitely a step up from the rather tired animations which continue to dog the main RPG series.

Overall, Pokemon Rumble Blast serves to demonstrate just how much a bona fide 3DS instalment of Pokemon is truly needed and how far other mimics fall short. Every spin-off and imitator serves as a reminder of the excellence of the source material. This game is a missed opportunity, because with the option to pick a group of faithful creatures and grow them into excellence through arcade play, I would have been tempted to forgive this game for its clear flaws in design. It's a shame that Pokemon Rumble Blast descends into an arms race so quickly.

You can support Chris by buying Pokemon Rumble Blast