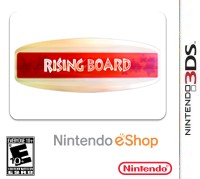 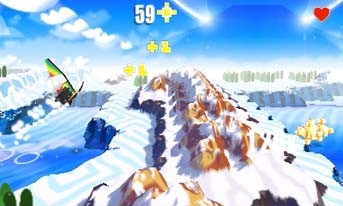 Rising Board is a fun, addictive arcade-surfing game, almost perfecting the concept of bite-sized play. There's just a couple of flies in the ointment which keep this from being a great time, every time.

Rising Board is a downloadable title for the 3DS. The concept is pretty straightforward: a side-scrolling sea rolls past as you control a surfing penguin to avoid obstacles and pull off tricks. A combination of two buttons and a direction allow for a small variety of tricks, spins and loops.

There isn't - at first glance - a huge amount of variety. But, Rising Board manages to pull off a stylish trick of its own which adds a surprising amount of longevity to this pocket-sized game. Each game begins with a set challenge and a randomly generated land/seascape. Whether being challenged to collect a certain number of points, perform a set of tricks or surf uninterrupted for a defined distance, these random elements combine to ensure that nearly every new game feels fresh and non-repetitive.

On paper, the polar opposite of the kind of game I like to play.

As a whole, the game has the appeal and attention span of a fruit machine - and I mean that in a nice way. A game often lasts less than 30 seconds, the obstacle penalties being many and unforgiving. The bright colours, cheerful sounds and beautifully crafted 3D scenes make it a thorough enjoyable short journey.

Rising Board is, on paper, the polar opposite of the kind of game I like to play. I like rich stories, deep narratives, engaging writing and characters with whom I can make a connection. But, Rising Board isn't the kind of game which commands attention for an evening or even more than 10 minutes at a time. It's a space-filler for those like myself with a short attention span. This is kettle-boiling time; waiting for a bus time; queuing for the bathroom time. It has earned a rightful place on my 3DS as a companion to brighten otherwise wasted minutes.

Where Rising Board comes in danger of a spectacular "wipe out" is in the level design. Part of the challenge is to avoid hitting land, forcing careful navigation through narrow straits and jumps over islands. Tapping "A" repeatedly allows the hero penguin to flap his or her arms to stay in flight to hover over extended land.

Sadly this is a pace-killer. There is no mechanism to determine the size of the ground below or where the nearest return to water may be found. What I alluded to in my short story at the top is that, for a surfing game, it contains an alarming amount of dry land.

A jolly good romp and make Rising Board an addictive gem.

I can't imagine a good reason why a game should be brought to a premature end by simply hurling a continent at the player and hoping that they don't mind. The only option is to grin and bear the failure and hope that the next randomly-generated level contains a more enjoyable run. It's just a pity that for a game that rides so well on its short, sharp play ideal should be marred by a design which means that one out of four games will be a disappointment.

But, those remaining three out of four are a jolly good romp and make Rising Board an addictive gem.

You can support Chris by buying Rising Board