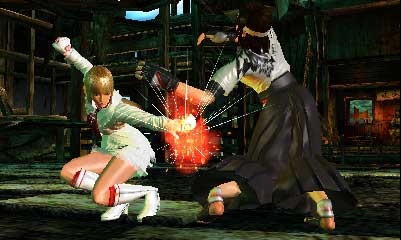 Tekken 3D Prime Edition puts a massive amount of characters, moves and locations onto the handheld. Unfortunately all this does is reinforce the old adage: less is more.

This is also possibly the hardest review I've had to write. I don't really approve when reviewers slate a game when it is clear that it is the whole genre they actually don't enjoy. I grew tired long ago of listening to hardcore FPS fans denigrating action puzzlers, or the constant futile comparisons between the relative benefits of realtime versus turn-based strategy, especially since there's frankly no contest and turn-based wins every time! Sadly, Tekken 3D Prime Edition has made me realise I dislike the Fighting genre.

The tragedy here is that I used to really enjoy beat-em-up games, even on the Amiga which suffered a particular lack of them. I spent joyful teenage hours perfecting the beheading technique in Barbarian and learning to master my favourites in Team 17's niche classic Body Blows. On the Playstation, Soul Blade kept me rapt, with seemingly perfect timing and execution and a delicate balance of defence and attack.

Beat-Em-Ups as a genre in themselves have evaded evolution.

As game genres have continued over the years, they have been subject to the demands of consumers. Specifically, this artistic form that we call gaming is still very much in its infancy and we have wanted to see innovation. Where a simple figure running around in circles on a screen, firing pixels at other pixels was sufficient to recall the adventure of the Wild West, technological advances and our understanding what makes games tick have given rise to more advanced games. Red Dead Redemption is how modern gaming now tackles the Wild West.

Gamers have wanted the option of more. Sequels are rarely allowed to deliver more of the same, they must add features and experiment. First person shooters added more guns, tactical options, choice of cover, multiplayer, regenerating health, narrative and motion capture. Platform games added co-op, 3D, twin-stick control and had the option of endless new worlds to explore. Flight simulators, driving games, strategy games and adventure games have all found ways to grow and adapt to audiences with new demands.

So what happened to fighting games? The simple format of two figures placed in an arena to beat the living daylights out of one another is hard to adapt. 3D arenas have been the major change as with other genres, since fighting game movement is mostly limited to towards and away from your opponent it's hard to truly benefit from the new environments. Of course the fighting itself has managed to escape from its genre shackles. Without this pioneering style the joyful melee combat of games such as Batman: Arkham City and Assassin's Creed Revelations would never have come to be.

But, Beat-Em-Ups as a genre in themselves have evaded evolution. Other species have taken their winning adaptations and run with them, while the progenitor itself has settled comfortably into an evolutionary cul-de-sac. Instead, fighting games have tried to grow using the only feature they ever truly had control over: the number of moves. Barbarian on the Amiga enjoyed a little over 8 moves, since the joystick could only face cardinal directions and there was a single trigger. Gradually, games added extra moves in two different ways. Simpler controllers relied on multiple presses, such as left-left-left-fire to allow a wider move set. Systems with newfangled joypads made use of the extra buttons to create combinations of their own.

Since the on-screen buttons are not labelled it is a truly random experience to use them.

Now, more and more moves call for extra button presses and deeper combos. As time has gone by I believe this has created a monster. Fighting games are no longer about simply facing an attacker and trying to best them with the simple tools of timing, defence and guile. Now, fighting games are all about mastering a massive library of complex moves. Suddenly, the genre has become about knowledge, pitting the memory of each player against one another and the accuracy with which they can reproduce lengthy button sequences, while the character on-screen moves through a set of choreographed actions, barely relating the actions of the player.

So after I've said all this, where does that leave Tekken 3D? Tekken 3D demonstrates to me everything that has become bad about the beat-em-up genre. There is a library of 40 characters, each of whom have dozens of moves. Trying to enjoy the game using simple moves is like bringing a knife to a nuke-fight. The moves in Tekken 3D are the result of an arms race which has got out of hand. In the battle to add bigger and more powerful combos to impress the crowd, it has lost the heart of a satisfying fighting experience.

In keeping with the precedent set by other 3DS fighting games, Tekken 3D also provides touch-screen prompts for move execution. However, since the on-screen buttons are not labelled it is a truly random experience to use them. It's also far less satisfying that getting to grips with a proper control scheme.

Tekken 3D will have its fans, I'm sure. If you've come to this review looking for guidance as to whether the 3DS has done justice to the game you love, I'd say the answer is a resounding probably.

Please forgive my doubt. It's just that as a result of decades of incest among fighting games, amid a genre that denies major change over time and also refuses to stick to the simple basis on which it was formed, Tekken 3D is a game of which I can't even come close to understanding the appeal. I know longer recognise it or even how to approach it. Sadly, I feel now more than ever that fighting games, as a genre, have become a niche pursuit suitable for only the most hardcore of gamers.

You can support Chris by buying Tekken 3D Prime Edition