Not Just Another Bug Hunt 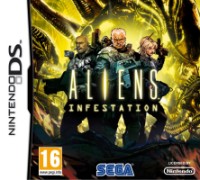 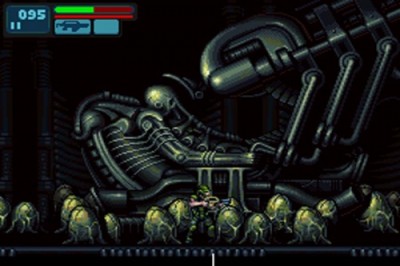 Aliens: Infestation is a loving homage to Aliens and Metroid Fusion. It's good but a little too blinkered to the shortcomings of these two inspirations.

It's very hard to play with Aliens: Infestation without feeling the looming shadow of Metroid Fusion (GBA). A side-scrolling platform shooter, with gradually unlocked doors and elevators, divided between the hub level of the Sulaco and a series of away missions which are Metroid Fusion's simulation sectors in all but name. After completing each of these you return to the Sulaco with access to areas of the ship previously out of bounds.

All of which isn't a bad thing, necessarily. Re-skinning Metroid with the pulse rifles, flamethrowers, welding kits and slavering Xenomorphs of the Aliens movies really works well and Aliens: Infestation delivers what I found to be one of the most satisfying Alien videogames. The greatest pity lies in the elements which is has not successfully lifted from its inspirations.

Metroid, with the pulse rifles, flamethrowers, welding kits and slavering Xenomorphs of the Aliens movies.

Firstly it's extremely hard to navigate. The Metroid series is very good with colour-coding locked doorways. This ensures that when you gain a new means of access it's very easy to look at the map and see the areas you have not yet visited. Aliens: Infestation attempts this by colouring visited rooms differently, but in not providing any hints as to the cause of the blockage, such as piles of rubbish requiring explosives or steam vents requiring the wrench and this leads to a lot of unnecessary backtracking. It does provide flare markers, which are wonderfully consistent with the source fiction, but after you've laid a good number of these it's hard to remember what each of them was for.

Sadly it also misfires a bit with the atmosphere. The Alien movies are tense, haunting experiences with iconic moments driven by the haunting wheep-wheep of the motion tracker. In Aliens: Infestation the sound of the tracker is a constant background noise. It can't scare, simply because it is always active.

As a writer I know how hard it is to create an effect which prompts dread in an audience, but to be handed a proven device and then use it badly is a wasted opportunity. Even the most flawed past Aliens games have delivered some atmosphere through careful use of the motion blip and with Aliens: Infestation's already high quality gameplay, good atmosphere could have made it a stellar experience.

However it does win some of its scare appeal back with the clever size of the display. Viewed from the side, it is hard to see what is coming ahead and the whole experience is one of claustrophobia and cautious progress. Aliens: Infestation also successfully ventures into the tricky area of hybrid Aliens to provide some variety in the enemies. This is very hard to pull off: I'd argue that Alien 3's canine-influenced Xenomorph is a successful example, while Alien Resurrection's dreadful baby Alien is not. Creating different enemy styles here feels authentic somehow and keeps things fresh.

The writing is also pretty good, notably the way dialogue adapts depending on which character you are playing as. The concept of "lives" has been cleverly reinvented through a roster of expendable Marine characters. Each of these characters manages to be memorable and with individual dialogue styles which mesh into the ongoing narrative seamlessly. As each dies, you pick a new Marine and carry on, but your overall squad of four can only be replenished by recruiting the scattered survivors who are located around the derelict ship.

The whole experience is one of claustrophobia and cautious progress.

I'd thoroughly recommend Aliens: Infestation to anybody with a DS or 3DS with only one slight hesitation. The (always hated) boss encounters are a regular feature in this game and they are all pretty cheap, with massive health bars, hard to hit weak points and powerful attacks which are nearly impossible to avoid or mitigate. For me these were a real low in the game and I only made it through by sacrificing two or three lives in the process simply to get past them.

For fans of the Alien franchise, Aliens: Infestation is a must-have title. Authentic effects, tools and weapons combine with an a plot that feels like a genuine side-story to the movies' events. All of this combines with a retro game design which is perfectly suited to the handheld. It's a real treat to see such simple arcade gameplay twinned with effective storytelling and enjoyable characters. It's only a shame that, like the heroes of the movies, so many of the best characters have to be left for dead.

You can support Chris by buying Aliens: Infestation