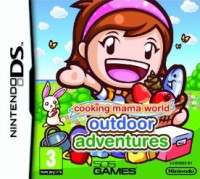 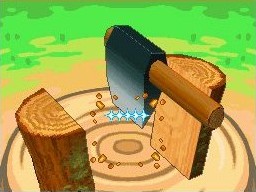 Cooking Mama World: Outdoor Adventures not only delivers the expected multitude of addictive minigames, but also wraps then up in a surprisingly coherent overarching challenge.

There's a game that came to my mind while playing Cooking Mama World: Outdoor Adventures that may surprise you: Metal Gear. It's due to the overall framework in which Outdoor Adventures sets its mini-game challenges: a series of top-down mazes full of items to gather, treasures to find and enemies to avoid.

This game is firmly aimed at the younger gamer, so when I say enemies I'm talking about small wild animals although as I point out in my story there is no distinction between the amount of health lost whether you confront a grizzly bear or a bee.

Still, I found these enemies to be tricky to avoid. Fast moving and unforgiving, they became a significant challenge. Without really realising what I was doing, I found myself studying their patrol patterns and looking out for the little alcoves which would allow me to duck in out of danger while the creatures moved past. It was at this point I suddenly felt like I was playing Metal Gear.

Ducking out of the enemy's path is a core gameplay characteristic of stealth action games.

Okay, so in terms of an overall narrative I doubt that the result of peeling apples and catching butterflies is going to be a deathmatch with a walking nuclear weapons platform. Also, I have yet to complete an Outdoor Adventures map by stepping up behind a monkey and quietly snapping its neck. Nevertheless the challenge of studying patrol patterns before making a moving quickly and then ducking out of the enemy's path is a core gameplay characteristic of stealth action games. This simple narrative device changes the dynamic of Outdoor Adventures' story from a simple island getaway to a nature survival challenge.

You might think this approach wouldn't be important in the game, but it is your final health on completing each map that contributes to the overall score. This means the only way to gain the top score for an area is to complete all the games and reach the final challenge with full hearts. This adds a dynamic to the game which I honestly didn't expect it to deliver and which encouraged replay as I attempted to beat the level without losing health.

The minigames themselves are the clear highlight. It amazed me that there was so much variety in the design and style of the challenges and that the game went for so long before having to repeat any games. Plus, it's unlikely that you'll find any frustration in the repetition which does occur, given that the games are so entertaining. There's a three-part game to build a slingshot from natural materials that I found to be a particular guilty pleasure.

They are also a highly variable challenge. At my age I'm hardly the target market for Outdoor Adventures, but as well as thoroughly enjoying the games I still found some of them quite difficult. Simple pair-matching games presented me with little difficulty, but skewering fast moving food pieces onto a BBQ spike in the correct order presented me with a few head scratching moments.

There is a side quest of item collection and campsite customisation to be enjoyed, but to be honest this lacks the immediacy of Animal Crossing's interface. Here the campsite must be tailored through a series of submenus, rather than playing around with different options in situ, which could potentially have made the whole process more entertaining and a fun game in itself.

As a simple minigame compilation, Cooking Mama World: Outdoor Adventures is a very entertaining collection for younger players. However, I found that the narrative setting of an island to be explored, combined with the challenge of evading creatures and hunting for secrets made the whole experience more exciting.