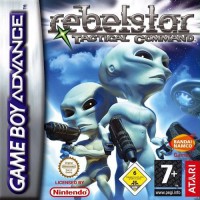 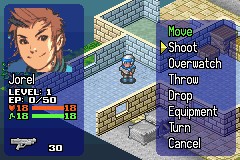 Rebelstar Tactical Command is a gripping tactical experience. It joins Advance Wars as a great turn-based strategy on the Gameboy Advance, and easily stands shoulder-to-shoulder with modern titles.

Rebelstar Tactical Command is a 2005 Gameboy Advance game I remember really wanting to play when it came out. However, I never owned a GBA and when I acquired my first DS Lite there were simply too many great new distractions to take time to look backwards. (This often happens and sadly there are many classics to which I may never have the chance to return.)

However I'm known for loving turn-based strategy titles and I was recommended to look up Rebelstar Tactical Command. It was developed by Julian Gollop, the designer of Ghost Recon: Shadow Wars (3DS) and XCOM (UFO: Enemy Unknown), games which I've played over and over. I had to do a bit of friends and family negotiation to borrow a handheld device to play it on, as neither my DSi nor my 3DS have a slot for GBA games. But, eventually I acquired a DS Lite with the precious backwards compatibility.

A fantastic strategy title, which requires a cool head and patience to progress.

It was definitely worth the effort. Rebelstar Tactical Command is a fantastic strategy game, which requires a cool head and patience to progress. An exposed unit will very quickly fall to enemy fire and, in spite of the turn limit, it is wise to save move points for better circumstances to attack. As in the case of my own story it is often the undiscovered enemy which does the most damage.

If I have a preference for Rebelstar Tactical Command over more recent strategy games, it is in the use of fog-of-war. Only being able to see the movement of enemies who are currently in sight brings atmosphere and tension to the proceedings. Each battle becomes a tense narrative, as you position units to guard suspected entry points to ambush the enemy. More mobile characters can then scout into the shadows searching for the enemy.

As a storyteller I'm always engrossed by games which allow space for the player to create their own micro-stories within the action and this game provides those opportunities in abundance with highly variable battle encounters.

The main story may be fixed but, thankfully, Rebelstar Tactical Command spins a highly original and entertaining yarn. Set during the second generation of an Earth subjugated by visiting aliens, the heroes are those whose brain-controlling implant chips have failed and have thus been allowed free action to join the rebels. With action ranging through mountains and forest, the story reminded me more than a little of classic 80's British sci-fi The Tripods.

Despite its age, Rebelstar Tactical Command compares very favourably with more modern games. The only real pity is that in spite of the great art style in the story screens and the diverse range of characters at the player's command, the technology of the time must only have allowed for one image for each unit type. Thus, on the battlefield everybody looks identical and for me this breaks the narrative illusion and makes it very difficult to identify characters at a glance.

However, Rebelstar Tactical Command allows a great amount of player freedom. Each soldier can be specialised with individual skill development and the later missions allow for the default weapon selections of each unit to be completely reset. This really helps the player feel that they are crafting their own characters and weaving their own story, even within the set narrative. However the missions still play out sequentially and feel very linear. Sadly the one thing this game is not is a return to the freeform globetrotting of XCOM, which is the standard by which turn-based strategy are still judged by fans.

Ultimately I'm extremely glad I found a handheld I could use to play this game. There's plenty of longevity after the story with a two-player mode in which players take turns while passing the console between them. There is talk of a GBA game download service for the 3DS and if this happens then I sincerely hope that Rebelstar Tactical Command is included. It's a gripping and challenging strategy title and to be honest had I not been able to source a DS Lite it would have been worth the additional £12 for an old GBA on Ebay. Rebelstar Tactical Command still easily deserves its place in gamers' collections, even after all this time.

You can support Chris by buying Rebelstar Tactical Command