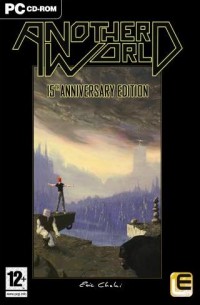 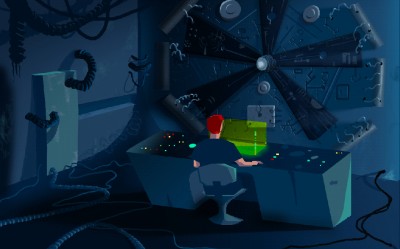 Another World is a classic and a genuine pre-cursor to most modern cinematic games. Recently I had the chance to watch its creator play it from start to finish.

Another World was written and programmed entirely through the efforts of a single person, Eric Chahi. These days it's hard to imagine that a team of one could produce the most epic, cinematic and visually arresting action-adventures on the market; but, as it turns out, that sense of adventure that Another World inspires is a direct result of Eric's solo journey.

"I didn't write the whole story first," Eric explains, "I just wanted to develop the action as I went along and as I added more code. I spent a lot of time the intro sequence first in order to develop the vector animation tools." It was the vector animation, which stores images as a series of mathematical shapes rather than pixel-based images, which allows for such large game characters and complex animations on a machine with only 512k of memory.

The original was developed for the Amiga 500, but in the director's commentary Eric led the crowd through at Nottingham's GameCity 6 he used the 15th Anniversary edition available for PC. This edition allows for slightly updated graphics and improved resolution. For the purposes of this retro demonstration, Eric used a mode which delivered the original 16-colour display and basic graphics. With Another World's distinctive visual style it's amazing how well the visuals still stand up against today's titles.

Let's be clear: no Another World, no Uncharted 3.

There are key moments when Another World demonstrates its ambitious cinematic desires. Shock as the player is punched back by an enemy just as they are expecting to run from screen-to-screen; comedy as the player shoots an alien chandelier onto the head of a passing guard, and pathos as the character reaches the end of his journey broken. As we watch the hero crawl desperately away from a hulking assailant, Eric laughs and says, "this was me at the end of making the game. This was how I felt."

The impact of Another World on the gaming scene is incredible. While Prince of Persia may have made a name for itself with rotoscoped animation (which recorded the actions of an actor performing the game character's moves) and point-and-click adventures leading the way with impressive visuals, it is Another World which attempted to blend the improved visuals of graphic adventures with the direct controls of an action adventure. Let's be clear: no Another World, no Uncharted 3.

Watching Eric play Another World is heartening. He gives a self-deprecating laugh as he dies for the third time in a row on a particular sticking point in the game, a deep-water swim which sees the player searching flooded tunnels for breathing points. He dies at the same places most of the rest of us will remember struggling. I'm always impressed by a game system complex enough to still give its creator difficulties.

Eric speaks about the pacing of Another World in terms of rhythms, set-pieces and sound. It's true that in watching him play Another World, I could see and hear my own journey with the game. In spite of the incredible freedom which the game delivered in 1991, Eric plays the game in an almost identical fashion to how I played it and how I'm sure many other players did as well.

The visuals still stand up against today's titles.

I was fascinated to hear the influence Manga had on Another World. With the comparatively low technology unable to imply high speed through blur, Eric used the Speed Lines which Manga artists use to create the effect of an object moving quickly. "I wanted to show the player moving quickly between levels," Eric explained, "originally the lifts were because staircases would have been too complex to program, but then later I ended up having a staircase anyway."

It was a fantastic experience to go back and revisit this incredible journey. There are huge differences between Another World and Eric Chahi's latest title, From Dust. However what does unite them is an amazing journey through a believable world with an incredible fiction. Both demonstrate his passion for creating a world in the best way the available technology can achieve.

Another World is a few years old now, but the 15th Anniversary edition can still be picked up around the internet for as little as £2 to £4 and there is a €9.90 version available as a digital download from www.anotherworld.fr.

You can support Chris by buying Another World 15th Anniversary Edition