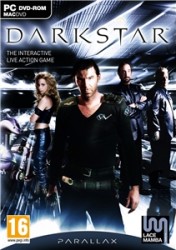 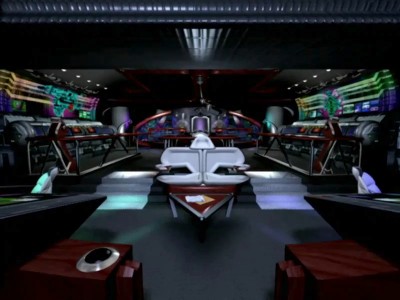 Darkstar isn't the interactive movie it self-describes as, but it does cater to adventure gamers who are largely un-catered for: the lesser spotted point-and-click variety.

Based on Darkstar's description as an Interactive Movie, I have to say that I came to it expecting something akin to the gaming efforts once attempted on laserdisc, CD-ROM and early DVDs. With nice box art featuring real actors, diverse and interesting locations and space combat, I felt certain that this would be a kind of Heavy Rain meets Dragons Lair. Far from that, Darkstar's gaming content is actually a retread of that most venerable of PC genres, the first-person point-and-click adventure.

Where Darkstar aims for a movie-style take on gameplay which harks back to the classic Myst series, is that the game has been designed with a narrator's flair for storytelling. Everything about the game reveals that storytelling and immersive narrative have been the watchwords throughout its creation. As a fiction writer and storyteller myself I found this immediately appealing.

Darkstar's basic premise is a classic setup for a mystery narrative.

As an example, Darkstar understands the importance of filmic cutaways in establishing place and character. Often you will find yourself clicking to move to a part of the ship and - rather than moving there in first person - you will be presented with a third-person scene of the protagonist walking into the area, maybe cutting to his expression to establish a character reaction. In other instances the game demonstrates changes to narrative pace, cutting to an external shot of the ship flying past, somewhat in the manner of Babylon 5 or Star Trek.

Even Darkstar's basic premise is a classic setup for a mystery narrative: the hero wakes alone aboard a deserted ship with no memories and must explore his surroundings and solve environmental puzzles to piece together the events which have transpired. As each section of the game is completed, a series of back-story movies are unlocked which reveal the history behind the events leading up to the game's start.

All of which sounds great on paper, but unfortunately I found the gameplay itself lacking and hard to enjoy. Darkstar's insistence on fully animated motion-video transitions when moving between sections of the ship kills the pace of gameplay and before long I found myself frustrated with the time it took to explore the ship in detail. This is exacerbated by the tiny click-able hotspots which are finicky and not always intuitive. It would have been nice to have some kind of fast-travel option between locations already visited.

Adventures such as Darkstar really live and die by their puzzles and sadly these have taken a back seat here. The majority of progress involves finding the right button to press to open the next door, while most of the actual brain-teasers are far too simple for seasoned adventurers. There is one particularly grating section in which the hero must explore an on-board virtual-reality maze, but once again the lack of intuitive navigation and the overlong transitions make this feel like a chore.

It would have been nice to have some kind of fast-travel option between locations.

Darkstar can, in some respects, be considered an enormous achievement, having been created largely through the efforts of a single individual over ten years of creation. Sadly, where this shows through is that the game-play and graphics feel very dated, having learned little from changes in game design over the last decade. Also, the software itself is a bit flaky and prone to crashes - a topic even covered in the game's manual - and some of the work to combine live action actors with computer-generated models often looks poorly executed.

However, having said all that, Darkstar works very well as a piece of fiction. The performances, while a little enthusiastically amateurish, sell the game's story well and the gradual revelation of the events which have transpired aboard the doomed ship and through Earth's future history are compelling viewing.

Furthermore, for those who like this style of point-and-click adventure and who have the patience for a slower pace of progress, Darkstar is the game you will have been waiting for since the last good Myst title. The puzzles aren't as compelling, but as an exploration adventure through mysterious locations it captures the spirit and feel of an oft-neglected genre very well.

You can support Chris by buying Darkstar