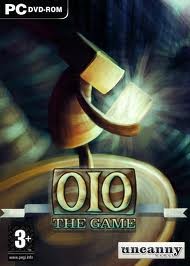 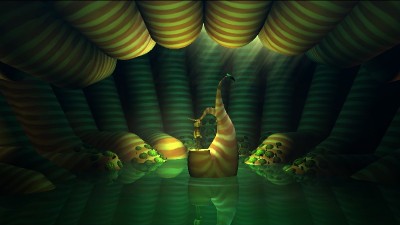 OIO has a beautiful concept and design, wrapped up in the most simple of game genres. It's only a pity it takes so long to get going.

Lets be clear, OIO is a platform game. Platform games are among the simplest concepts in the gaming lexicon and it's pretty unnecessary for a platform game to provide a lengthy tutorial. That OIO chose to devote the first two levels to explaining its own basic design seems to me to be excessive.

Patience is a virtue in this case. Any player who holds out for the better things which OIO has in store may well be rewarded. Eventually the game introduces its own unique feature: the ability to grow columns out of nearby soil. These columns cannot be grown anywhere and can only exist three at a time; the scene is prepared for the unfolding of some though-provoking puzzles.

The world depicted is melancholic, graceful and surreal. It's like a mash-up of Doctor Seuss and Tim Burton

The character and world design is wonderful. The title of the game, OIO, is a clever reference to the facial features of the hero. The world depicted is melancholic, graceful and surreal. It's like a mash-up of Doctor Seuss and Tim Burton. The narrative is revealed gradually and with a gentle touch, as the hero passes the frozen forms of his fellows who seem to have been struck mid-action. There are clear influences here from Limbo and the subtle way in which the narrative gradually plays out.

Once the pace of the action does pick up, it is very enjoyable. Many of the construction puzzles require some real thought to master, especially to collect hidden items. Some of the platforming verges on frustrating, especially in the quest for 100% completion of a map. It's very common to have missed just one collectible, only to find that a restart point has triggered and there is no way back. Completists may find themselves having to replay entire levels to pick up stray tokens.

Taken purely as a platformer, OIO demonstrates its weakest element. When comparing any platforming hero to Mario, Sonic, Kirby, Donkey Kong or any great title, it's common to praise the intuitive feel of the Jump ability. In a platform game, there is a special relationship between the arc and timing of the jump and the platforms with which the world is populated. OIO occasionally sets into a comfortable groove with the platforms and movement, but it is at the moments where the relationship breaks down where it is at its worst; where a section of jumps becomes a frustrating blockage rather than a joyous expression of game mastery. I found this was demonstrated most often in OIO by my having to stop the character mid-jump to avoid overshooting a ledge.

What struck me most about OIO is that it was very uneven. The beautiful art and intriguing puzzle mechanic seem to be on a different scale from some fairly pedestrian level design. It's almost as though OIO is a prototype for another, more complete project. It is a very entertaining distraction and the asking price should deservedly tempt many takers. Yet, compared to its peers (Limbo included) it simply doesn't seem entirely finished.

In many respects the greatest shame is that such a wonderful creation is locked inside such a basic game.

Nevertheless, as the short story at the beginning reflects, this game is a wondrous Fairy Tale of an adventure. While many games provide entertaining platform action, this new wave of thought-provoking, atmospheric and narrative-mystery side-scrolling games is truly exciting. OIO combines a just-one-more puzzle approach to an engrossing fiction that draws the player further and further in. It's only a pity that revealing that story can require some occasionally frustrating and repetitive sections.

OIO is worth investigating, if only for the beautiful views that it offers of its own skewed world. The vistas are strewn with a painterly hand and lit with a profound sense of theatricality. In many respects the greatest shame is that this wonderful creation is locked inside such a basic game.

OIO is now available for the PC and Mac via download.

You can support Chris by buying OIO