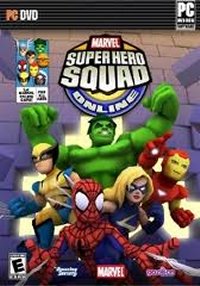 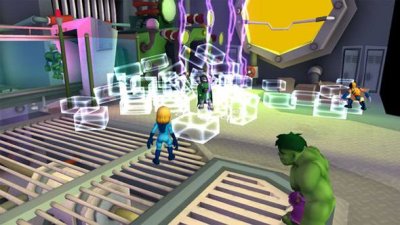 Alongside a range of mainstream Marvel comicbook-to-movie-to-game adaptations, Super Hero Squad Online offers a very different path into enjoying the greatest comic book heroes. With its bold cartoon-like visuals, simple play controls and huge roster of characters it could easily become a favourite superhero game among players of all ages. The core experience is free-to-play, but much of the additional content, levels and characters are to be available as micro-payments.

On the surface, it is a quintessentially child-oriented game. The big-headed avatars of the characters offering a much lighter take on the subject matter than the gritty film treatments which many of the characters are receiving. That's not to say it doesn't represent a legitimate take on the comic book source material. There is an impressive range of characters from the Marvel universe, including Iron Man, Wolverine, Mr Fantastic and The Hulk as well as many others.

In spite of its overall design for younger players, the browser-based nature of Super Hero Squad Online and the bite-sized mission makes it perfect for older players to dip into with a free moment, or even to play together with their own children. At a meeting I had with Keith Mutzman from Gazillion Entertainment, he explained, "the average age in the studio team is over 40 so they're parents and they wanted to create a family game; something they could have fun playing and have fun playing with their kids."

I casually made my way through a mission with simply one hand on the mouse.

It's a very social experience. It's very easy to find and befriend other players in the social hub world, in which players can take ownership of a home environment which they can decorate and customise to their wishes. Starting a game with online friends is also very easy and it is a simple process to get up to four player co-op going quickly.

Combat is also easy to control -- in fact I casually made my way through a mission with simply one hand on the mouse while talking -- but there are a range of great authentic attacks for each character, as well as an alternate attack which uses power stars and ultimate attack which can be unleashed when a player is at full power. There's also a range of social and emote options to communicate with other players.

The social side of the game is handled smartly. As the game is aimed a young audience the developers have wanted to implement a way of keeping the game sociable, but at the same time protecting the younger players. "We're all about safety," Mutzman says, "When you register an account it can be with just the predefined phrases and you will only see chat from the that channel, or you can have a regular adult account with normal chat, which we obviously moderate to make sure it isn't abused."

It's a refreshing change of pace from other action titles and the colourful style and visual humour that has been worked into every character and the clever attacks (my personal favourite is Iron Man's special attack which deploys speakers from his suit, rooting all enemies to the spot while they dance to the pumping tunes) make it a very lovable title.

Sadly at this stage it is without a confirmed UK release date, although work is underway to achieve this.

Super Hero Squad Online will be available as a PC browser-title soon.

You can support Chris by buying Super Hero Squad Online