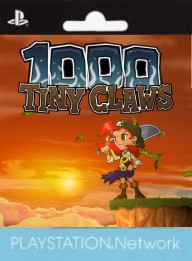 Further reading:
The Legend of Zelda: Ocarina of Time
Lara Croft and the Guardian of Light
From Dust 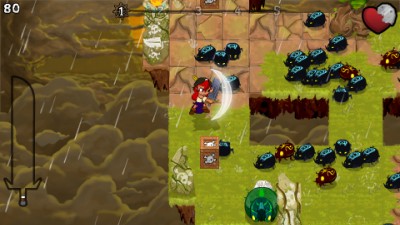 1000 Tiny Claws is a surprisingly epic entry in the Playstation Minis series, with an innovative - if confusing - gameplay mechanic.

As a storyteller, I'm interested in games which spin a good yarn and make me feel like I'm going on an adventure. With a rich game-world full of Pirate ships borne aloft by hot air balloons and populated by charismatic and funny characters, it would seem that 1000 Tiny Claws would be fertile ground for a deep and entertaining fiction.

However the game doesn't pick up this opportunity and the fabulous characters are left with only subtext and a few choice one-liners. The environments do not expand on the fiction either and each new level simple feels like a series of pedestrian combat arenas for group brawling.

Where 1000 Tiny Claws does innovate is with an unusual battle mechanic. Here, the more times an enemy is damaged, the further away they are knocked with each hit. The ultimate aim is to push enemies off the floating platforms on which the action takes place. The same system also applies to the player and I found it very easy to get pushed out of the arena with a single hit if I didn't watch my health gauge.

The fabulous characters are left with only subtext and a few choice one-liners.

The damage system provides some entertaining variation compared to the standard group-brawling-style game, but I did find that actually keeping track of who I'd already hit amongst a group of similar-looking enemies was near impossible. Generally, I found that most levels could be beaten using occasional hitting and frequent running away. It is a button-mashing battle game, but no worse for that. When the sword meter fills, allowing for a super-attack, it is a genuinely rewarding climax to the action.

I found the boss encounters a little confusing, too. Most well-implemented game bosses are effectively puzzle challenges designed around a skill or ability which the game has recently introduced. A game such as The Legend of Zelda: Ocarina of Time is a classic example of this in operation. 1000 Tiny Claws takes an opposite stance, with techniques required to destroy the boss having to be worked out on-the-fly. I found it a little frustrating to die several times in a row without ever having worked out how to damage the boss.

With its direction-pad based controls and levels lasting only a minute or two, this is probably a game which makes more sense on the PSP than it does on the big screen as these bite-sized offerings often do. As a PS3 title I found myself wondering why I couldn't use the analogue stick. Also, in comparison with other PS3 titles I've yet to experience a Minis game which compares favourably to full-blown PSN offerings such as Lara Croft and the Guardian of Light or From Dust.

However, 1000 Tiny Claws does have an appeal of its own. The pace of the action is good and the light style has the potential to be hit with fans. For me, the core gameplay doesn't quite live up to the complexity of the battle system, but it was an extremely enjoyable blast through a few levels. Alongside this the quirky characters and humour are well delivered.

It is a button-mashing battle game, but no worse for that.

Ultimately the Minis series are fun-sized games and I only had a fun-sized amount of fun playing it. The production values and length put it well at the top of the class for Minis titles and it certainly has an addictive quality. However, I found that the weak narrative - both in story and environments - prevented me from being engaged enough in the adventure to see it through to the end.

You can support Chris by buying 1000 Tiny Claws