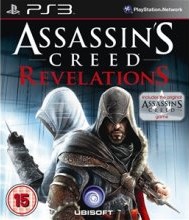 How do you define the difference between an RPG, a sandbox and an adventure game? The first Assassin's Creed was a fairly straightforward third-person combat game but each game since then has added more and more to that basic framework. The locations have grown, the list of skills have grown and the involvement you have in the development of the environment has grown.

With Assassin's Creed: Revelations, so much has now been added to that formula that it has evolved into a different type of game entirely. The adventuring is just the tip of the iceberg in comparison to the meta-games that surround it.

The fiction is still great and the cities are recreated with a clear love for the spirit of history and archeology. The combat is rewarding and intuitive and allows for genuine personal expression. I personally like showing off by approaching a group of guards totally unarmed, then disarming the first guard who makes a move and using his weapon to dispatch the rest. It's exciting because it lets me develop a personal play style.

I was managing an open-world role-playing game rather than an action adventure.

The range of options for that expression is incredible. Weapon selection supports personal preference greatly and there is an intricate and flexible bomb-making system. Other Assassins can be summoned to help, or simply ordered to attack a target if one prefers to command from the shadows. It was as this point I began to feel I was managing an open-world role-playing game rather than an action adventure.

Set around this is a strategic meta-game, in which the city must be renovated to provide items and income, Assassins must be recruited and trained and neighbouring Mediterranean countries freed from Templar control. The last of these is achieved by sending trainee Assassins on covert missions to destabilise the authorities, in return for XP, levels and eventually a steady income stream.

This was an effective way to tell the story of Ezio's rise from lone wolf to master Assassin and leader of men. As in the story, he has achieved promotion and is able to command his forces far and wide, often without lifting a finger himself.

This means that there is an awful lot to learn for newcomers to the series. For those not keeping count, Revelations is Assassin's Creed IV. I had previously played Assassin's Creed II - the knowledge of which has helped me to get to grips with this - but even having missed only one episode I found that it's quite a hard game of catch-up.

This extends to the complex and twisting plot as the game provides only sparse "previously" moments. It is a truly original story and a captivating narrative, but as with all good stories it really needs to be followed in sequence to be fully understood and enjoyed. In terms of plot and gameplay, I would say that the best tutorial for Assassin's Creed: Revelations is to play the previous games first.

A detailed, gripping and massive toybox with a truly exciting overarching narrative.

The multiplayer is highly unique, with each player being given a target they must assassinate, while at the same time also avoiding being killed. Stealth and evasion come in to play and since the maps are filled with similar-looking non-player characters, it becomes a tense game of cat-and-mouse to work out who are the human-controlled players and who are the dummies.

It reminded me very much of the indie darling Spy Party. It's worth noting that the online pass for multiplayer is one-use only, so those buying pre-owned copies will have to make an additional online purchase to take part.

Assassin's Creed Revelations is a detailed, gripping and massive toybox with a truly exciting overarching narrative. It's a pity that it doesn't do more to welcome new players, as I'm sure the prospect of playing through all three previous massive titles is a little daunting. For fans though - and for those that undertake the complete journey - this is the most incredible and involving episode in the series yet.

You can support Chris by buying Assassin's Creed: Revelations