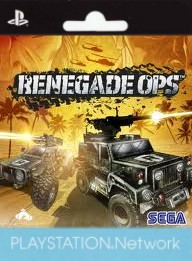 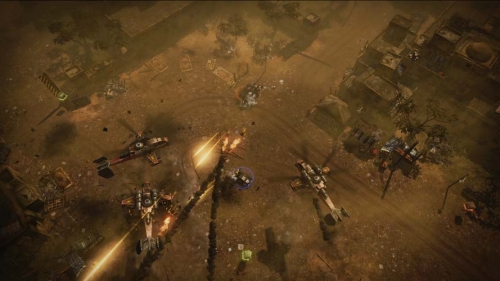 Renegade Ops is a joy-filled blast through action movie cliches with a wonderfully retro flavour. In spite of teething issues, this deserves to be an instant classic.

Renegade Ops immediately filled me with nostalgia. The cigar-chewing, procedure-breaking, shoot-first characters seemed lifted straight from a 1980's Schwarzenegger action movie. At the same time the gameplay, with its top-down driving, bouncy physics and shooter mentality, immediately put me in mind of a cross between Micro Machines and Desert Strike. In fact it came as no surprise to me when I saw Andreas Tadic's name in the credits, contributor as he was to Team 17's classic era of Alien Breed and Project-X.

It's an addictive and satisfying game, with just the right level of scenery destruction to make it feel like a guilty pleasure. Renegade Ops is the perfect pick-up-and-play shooter with a well-judged combination of style, setting and narrative that marks out the best titles.

Renegade Ops is a fantastic game and deserves to be highly successful.

At its heart, Renegade Ops is a twin-stick shooter on wheels: the left stick pushing in the direction of travel and the right stick aiming fire. I personally found this control scheme to be instantly likeable and having to manage the direction-based control with the turning momentum of the vehicle is part of the fun challenge.

My partner joined me for a two-player splitscreen co-op game. Her gaming experience is less than my own and her main points of reference for this were Micro Machines and her teenage years spent racing RC cars. As such, she found the control scheme to be counter-intuitive. She would have preferred the option to change the steering mode to a forward/backward/steer approach, but sadly the game does not (at the time of writing) offer this feature - this diminished her own enjoyment greatly.

Nevertheless, Renegade Ops is tremendous fun in co-op mode. There is a nifty Dynamic Split screen mode, which shares the screen between both players when close. When the players separate, the screen splits between them. This can be confusing, as the screen splits at an angle between the players' relative positions; meaning that if both players drive past one another they end up swapping sides. Still, this approach works very comfortably and was our preferred mode.

The game lost its edge slightly during the helicopter sections. These moments do raise the excitement, in a narrative sense, as the player takes heroically to the skies. But, where I had hoped that this would provide a great change of pace, taking away the 360 degrees of firing in favour of shooting in-line with the helicopter's direction of travel suddenly made the vehicle seem unwieldy. Also, the inability to manage the height of the chopper caused much clipping with the scenery.

It's the perfect pick-up-and-play shooter

My experience with Renegade Ops wasn't without its flaws. I failed to find an Internet multiplayer game to join, in spite of searching over multiple days. We experienced a number of bugs during co-op, including freezing, disabled character abilities and slightly wayward objective markers. Hopefully the developer is working hard to fix the bugs, as Renegade Ops is a fantastic game and deserves to be highly successful.

In spite of that, there is very little which could diminish how much fun I had with Renegade Ops. It's great to have a shooter of such quality, variation and fun to dip into - and I found replaying previous levels to be just as exciting.

Renegade Ops is now available for download on XBox 360, PC and PS3.

You can support Chris by buying Renegade Ops