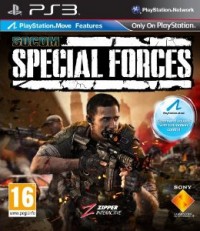 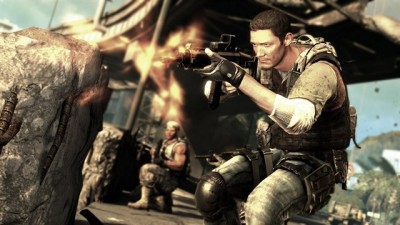 SOCOM: Special Forces provides a stop-gap cinematic military shooter, but it's the attention to detail which lets it down.

I felt a bit harsh continually comparing my experiences with SOCOM: Special Forces to Call of Duty: Modern Warfare, especially since that is a series I don't personally enjoy. However, SOCOM enabled me to appreciate the writing in Modern Warfare that creates a cohesive narrative and makes the action part of a consistent world, rather than simply a series of levels that the designers thought would be a good idea.

For example, SOCOM: Special Forces opened with my character returning from a recon mission and I found myself on the first floor of a glass-fronted building. I had no idea why I was there. From the war-torn city I then found myself suddenly in a jungle searching for support. After that I was in a train depot at night. The narrative sort of hangs all these levels together, but it often feels like the story is having to justify the game content, rather than the game drawing on settings from an interesting fiction.

There are a few design issues I struggled against, too. Navigation markers have to be walked over very precisely, even where it is obvious where the game wants you to go. Sometimes this means taking a route you wouldn't otherwise choose, often leading you into the sight of an enemy. Other times I've had to backtrack to a previous marker in order to get the next waypoint to appear. Occasionally I have had stray waypoints whose purpose I have yet to figure out.

SOCOM: Special Forces can't decide whether it wants you to avoid enemy contact or not. Levels are treated as either stealth or combat, denying me the option to choose my own path. Regularly the in-game chatter will refer to not being spotted, only to place a navigation marker in a place where you cannot help but alert the enemy to your presence. For me, this broke the immersion I had in the story and continually reminded me that I was playing a shooter with trigger points for shooting sequences. It rarely felt like the cohesive world required for truly great interactive fiction.

That aside, the core shooting is great fun, especially when given command of two separate squads. Each of these has strengths in a different area: blue team is good for close-up shooting and yellow team has silenced and scoped rifles for quieter and more long range options. It is entirely possible to play entire missions just utilising the skills of these two fire teams and I found that doing so was an extremely rewarding way to play the game. It almost transformed into a strategy title with a highly immersive camera.

The scale of the action is also big enough to make up for some of the shortcomings of the story, with some nicely directed moments along the way. Every now and then it does feel like being involved in a wider struggle, especially when sneaking out of an early stealth mission with crowds of panicked guards scrambling around. Although to my frustration, once the veil of stealth is broken, enemies will make a beeline for your exact position, even if you escape them and try to hide once again. Once again I found my belief in the scenario broken.

The core shooting is great fun, especially when given command of two separate squads.

Co-op play is also something of a saving grace, although sadly only available online. If you're new to online play, the people you meet will be a mixed bag as military shooters seem to attract the least polite of gamers. I got kicked from my first game by the host, presumably because he didn't think my newbie efforts were good enough. However I've managed to get a few games with a nice crew and had a pretty good time. If you're more into player vs player, competitive multiplayer delivers exactly as it should. The only gripe to the whole multiplayer experience is the complexity of muting other players during action. In the time it takes you to silence an obnoxious and offensive player, you'll probably find yourself searching for your avatar's missing limbs.

Ultimately it doesn't impress as much as some of the bigger tactical military shooters available but it does still manage to be a credible and enjoyable adventure. If you're a hardcore fan of this genre then the unique take which SOCOM: Special Forces offers by being third person and relying so strongly on squad tactics is worth trying out.

You can support Chris by buying SOCOM: Special Forces