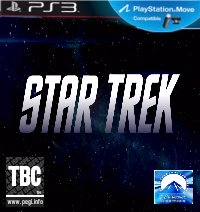 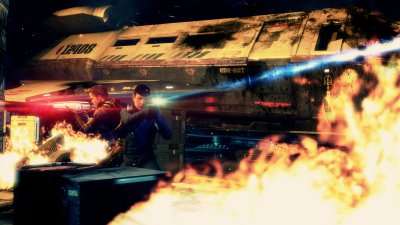 Star Trek offers an intriguing take on the co-op action genre by giving both players a unique identity and an action packed chance to experience the friendship of two screen legends.

With a story set between the previous JJ Abrams' movie and the forthcoming sequel, Star Trek is a third-person action adventure with a focus on co-op action. The demo which we saw at E3 featured a scenario in which Kirk and Spock return to the Enterprise to find the crew mostly dead or missing and the ship overtaken by an alien foe. As the two legendary characters battle to regain control of the ship they engage in banter, shout warnings and exercise different skills in their adventure.

While the team present were keen to emphasis that this was a very early version of the game, it's already easy to see much of the magic in place. The likenesses of Kirk and Spock from the recent movie update are striking. Different elements from the Star Trek universe come into play, as the famous Tricorder can be used to scan for information, as well as take control of ship systems. During a firefight in the shuttle bay, Kirk finds himself pinned down under fire from an enemy using a cargo container for cover; he quickly uses the Tricorder to manipulate a nearby crane which removes the cover, leaving the enemy exposed and vulnerable. In another section, the Tricorder came in handy to overload a computer bank, which exploded and took out the nearby enemies.

The action is dynamic and authentic to the Star Trek universe. The standard issue phaser is present, with classic Stun and Kill settings. As each character gains new abilities, these abilities reflect their characters -- any upgrade is considered a personal skill they learn, rather than a weapon modification. In this demonstration, Kirk gains a powerful one-shot disintegrate attack, while Spock acquires a handy auto-fire mode, allowing enemies to be strafed.

The famous Tricorder can be used to scan for information, as well as take control of ship systems.

The core gameplay is a familiar cover-based third-person shooter style, which feels immediately comfortable for the style of action being presented and also allows the player to enjoy the animation and reactions from the on-screen characters. At this early stage, some of the interactive scenery elements are not obvious to a new player, but hopefully a more complete version of the game will provide subtle prompts -- probably though a spoken comment from one of the characters -- as to possible strategies.

During the demo, the third-person action is broken up with some entertaining action set-pieces in which players must fly through a deadly minefield at speed and piloting a shuttle remotely to crash into the bridge of the Enterprise, providing the heroes with an invaluable distraction to aid their escape. With Star Trek providing such an excellent narrative thread to the adventure it will be interesting to see what other action cutscenes emerge in the final game.

It's shaping up to be a great co-op experience, which focuses on keeping both players active in play. When one of the characters became injured in the demo, they were still able to defend themselves by firing from a fallen position, albeit in a limited arc, reflecting their injured state. Even during an action cut-scene the player was still allowed the chance to aim and shoot during the animation.

At the heart of the action is the interaction between Kirk and Spock and how the differences between these two men impact upon the events which unfold. During the opening scene of the demo, Kirk and Spock must fly into one of the Enterprise's open bays - the reckless Kirk coming in at too high a speed and careering into some nearby storage containers, while Spock delivers a logical (and smoother) landing.

What is at the heart of the action is the interaction between Kirk and Spock and how the differences between these two men impact upon the events which unfold.

It's a great approach, allowing both players to feel they have a unique role to play and character to engage in the unfolding action and the different play styles for each character. Hopefully there will be plenty of opportunity for character-specific tasks to play out in the campaign and should lead to some great buddy gameplay. It may also encourage replay value of the title, with players keen to try the campaign in both sets of shoes.

You can support Chris by buying Star Trek