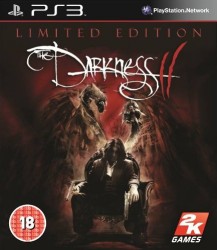 Other GamePeople columnists have reviewed this from their perspective - huh?:
Story Gamer (360)
Multiplayer Gamer (360)
Reporting Gamer (360) 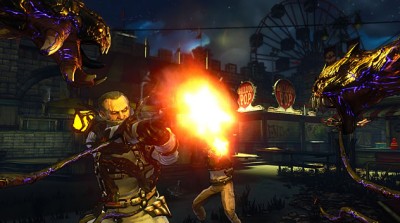 The Darkness II is a bleak and vicious first-person shooter, tinged with dark comedy. With a roster of great characters and an intriguing plot, it's only a pity that quality of the storytelling isn't consistent.

I haven't played the first The Darkness. It seems as though the designers are anticipating that a lot of players will, like me, have come to The Darkness II fresh as not only does the game offer an optional "previously on" montage, but the characters are reintroduced carefully and a few at a time. Overall, my first impression was that, as a new player to the series, I was being looked after kindly.

I've chosen to highlight the opening scene in my customary Flash Fiction above as it left an impression on me. Not only is the opening narrative genuinely shocking, the tightly-bound combination of gameplay, setting and story sets the scene for a great game. Jackie's character and position are perfectly established, despite firstperson being a perspective which prevents the main character from been seen on screen.

It's such a strong opening act that I found myself a little bit underwhelmed by much of the rest of the game. After a strong and stylistic introduction, the game quickly settles into a pattern of lengthy face-to-face conversations and fairly standard linear shooter levels. The careful touches which must have been applied to every moment of the opening are not applied in the same way throughout.

The tightly-bound combination of gameplay, setting and story sets the scene for a great game.

The biggest problem The Darkness II faces is that even though the story is interesting, it can be a bit dull to watch. Keeping the game in firstperson is a brave attempt to maintain immersion - and was demonstrated by Half-Life 2 to be highly effective - but ultimately the story related here is through NPC's talking faces, rather than watching interesting scenes. The old storytelling adage of "show, don't tell" has been sidestepped and there's only so long these dialogues could hold my interest. Not a fan of Oblivion-style exposition, I found myself skipping a great deal of scene-setting story.

There are notable exceptions and some of Jackie's flashbacks of his dead girlfriend are gripping and his own dour monologues (which cover loading times neatly) are well directed and engaging. There are a whole sequence of non-combat levels which I won't spoil, but these provide a fascinating glimpse into another possible reality for Jackie and the other characters in the story. These sections are well paced, well delivered in terms of narrative flow and for me were the highlight of the game.

The single player story is odd, because not only do the non-combat levels outshine the shooter levels at times, but the game itself is pretty short. A huge amount of the game's content is to be found in the side missions - a selection of four-player online co-op missions (most of which can also be played solo) which reveal a side story to the main action. The actual shooting levels here are often more entertaining than the main game and the four quirky characters have their own distinct personalities.

For a game which is all about darkness, I'm glad it doesn't pull any punches. I have a gripe with fiction which sells itself as an anti-hero story, but makes the protagonist and setting far too moral. Evil is not the same thing as grumpy. Jackie is a thug and his world is wholly corrupt. There is an irony to the story that Jackie embraces the Darkness to try to save the soul of his girlfriend, seemingly the one beacon of goodness and decency in his life.

You should understand that the seedier side of life is well trod here..

But you should understand that the seedier side of life is well trod here. In a sense it often feels like it's trying too hard to feature adult content and doubtless many will find the content offensive. The images are graphic and extreme, from enemies being ripped in half from the legs up, to murky brothel scenes and even the cheeky cockney demon urinating on the bodies of the fallen. One scene even sees you witnessing your own crucifixion from a firstperson perspective as well as visions of your dead girlfriend in Hell. If you have any sensibilities, The Darkness II will have a good go at offending them.

In spite of the disappointing way the story was told, it was still the strength of the plot which kept me with this game to the end. As a shooter it is enjoyable enough, although adventure fans may find the shooting too generic and shooter fans may find too much play time given over to story sequences. But for both it's nice to have an action game with such an original setting and quirky fiction. Even if I did end up skipping a lot of it.

You can support Chris by buying The Darkness II