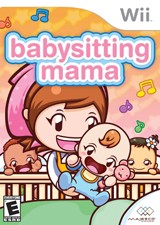 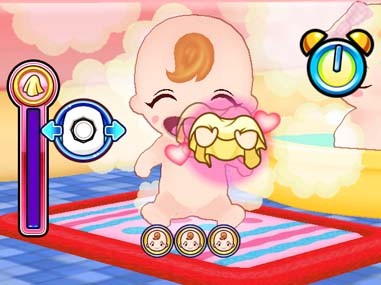 Cooking Mama World: Babysitting Mama is a terrifyingly saccharine assault on the senses. However it provides a great way to blur physical play with the game world, as long as you're the right age.

Cooking Mama World: Babysitting Mama is a series of minigame challenges, as perfected by the Cooking Mama series, in which you have to take on a series of childcare activities, such as feeding, nappy changing, burping and providing various entertainments. All of these activities are given added realism by the provision of a plush doll into which the Wii remote can be inserted. In this way, your actions with the doll-remote reflect your performance in the game.

It was very quickly apparent to me that Cooking Mama World: Babysitting Mama really wasn't aimed at me, such was the glaring diffusion of colours, sounds and movement on the screen. It's like watching In The Night Garden with the volume and colour saturation on your TV turned all the way up. Combined with the squishy doll, I found playing Cooking Mama World: Babysitting Mama something of an emasculating experience. Sitting in my living room pretending to wind a plush doll of a baby is far removed from my usual gaming activities and certainly drew amused looks from my partner.

The doll seemed to be appealing enough to be played with as a toy in its own right.

Thankfully I have a willing volunteer I can call upon in such moments of desperation and I drafted my three-year-old niece to help. The Wii is a pretty new addition to their household and she is just starting to be interested in the possibilities it offers, although she still doesn't really understand most of the games.

However, she understood the principal of Babysitting Mama almost instantly and eagerly played game after game, mimicking the baby actions she could see on-screen. For her it was such an obvious correlation between what she needed to do with the toy in order to progress through the game, we had to explain little.

While I found the physical doll to be an odd intrusion into the real world - like a kind of reverse Augmented Reality, in which the game superimposes a real object onto me - my niece found it an endearing and clear way to mask the game controller. For such a young child, it also pleasantly blurs the boundaries between video game play and toy play. The doll seemed to be appealing enough to be played with as a toy in its own right, but then can be played with in conjunction with the game to provide more detailed entertainment.

It wasn't a totally successful experiment. Cooking Mama World: Babysitting Mama regularly reminds players not to "shake the baby", but my niece was perhaps a bit too young to really play the game with any fine control. She struggled to find the balance point between playing gently enough to appease the game while still making movements which the basic Wii controller can interpret.

The variety of minigames here is not as broad or as interesting as other Cooking Mama games.

In spite of an excellent attempt by the game's creators, the variety of minigames here is not as broad or as interesting as other Cooking Mama games, presumably because the source material in this case is more limited. There are only so many ways rocking a child to sleep can be turned into gripping gameplay.

All of which combines to place Cooking Mama World: Babysitting Mama into a very specific age band. It needs to be played by children who are old enough to have finer controls over their actions while playing to perform well at the game, while still being young enough to appreciate playing games with a doll.

Thankfully, unlike many games it does well to avoid the language problem, whereby a game relies too much on written instructions to provide help on the game and by doing so alienating players who are not yet comfortable with reading. Cooking Mama World: Babysitting Mama, thoughtfully provides most of its explanations through a series of pictorial scenes, making the game highly accessible to youngsters, even without constant attention.

In summary, if you're looking for an engaging game for a child who is interested in dolls and baby-care make-believe and you don't mind having to listen to needlessly cheery music and over-enthusiastic dialogue from the game's characters, then Cooking Mama World: Babysitting Mama is a unique title with a great approach for younger gamers.