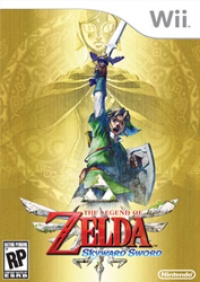 Other GamePeople columnists have reviewed this from their perspective - huh?:
Reporting Gamer (Wii)
Podcast (Wii) 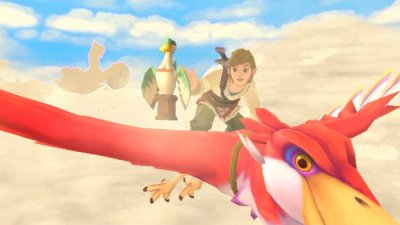 The Legend of Zelda: Skyward Sword transcends its own brilliant design to deliver a character drama of surprising impact. Even those whose Wii consoles may have gathered a little dust would do well to brush them off for this epic.

The Legend of Zelda: Skyward Sword is, in my opinion, the greatest Zelda adventure ever made. The whole package works brilliantly, from what is one of the best stories in Zelda history to a world-exploring collection game with side quests that complement the main narrative perfectly. Usually I find something in most Zelda games that doesn't quite fit: either travelling between areas takes too long, the plot too inconsequential or the combat too gimmicky. None of these issues temper Skyward Sword, which delivers a perfectly judged and immensely personal saga with real emotional weight.

MotionPlus is a requirement for the game so those without a compatible controller will need to either buy a plug-in or the lovely Skyward Sword Limited Edition which comes with a Zelda-branded gold-colour remote.

MotionPlus adds precision to the game, providing improved sword duelling, intuitive flying controls and some wonderfully complicated object-rotation puzzles. However, in the heat of combat the delicate controls often become confused between moving to prepare a strike and actually swinging the blade, which can be frustrating.

I felt like an actor in the great narrative drama.

For me, the reason why The Legend of Zelda: Skyward Sword works so well is the way the writing allows the story, characters and environment to mesh together. There are so many reasons why the story here rises above most adventures, not least that every appearing character seems to have their own story and development as the game progresses. I truly felt like an actor taking part in the great narrative drama, which I think is what good interactive fiction needs to achieve.

For example, I found it easier to care for the quest to rescue Zelda this time, because I was given the chance to establish a connection with her before she went missing. The village rival, a two-dimensional staple in so many role-playing games, was given context through the playing out of the grievances between him and Link in the opening sections. Skyward Sword engaged my imagination from the start by bringing me into a world which had never seen the surface, only to invite me to venture alone beneath the clouds. It was a truly exciting proposition and the perfect narrative setup.

Initially I was scared that the game world was going to let me down. Gone is the interconnected world map which links all locations together. Link effectively warps from location to location via a hub in the sky. Zelda's overworld was the first thing I loved about Zelda games when I first played Link's Awakening.

In practice this actually makes the world feel larger, not smaller as I had worried. In only seeing glimpses of the forests, mountains and desert beneath the clouds, it made it easier to imagine a world extending beyond the areas I saw. It feels like a fully realised place to explore, rather than a series of weirdly conflicted geographies pasted together by linking corridors.

The story finally takes centre stage amid a cast of fantastic and memorable characters.

The pace of Skyward Sword's narrative is also perfect. From the moment Zelda vanishes the storytelling delivers a sense of purpose and drive to recover her. There is always the feeling of being just a few steps behind Zelda and fighting to catch up, rather the usual feeling that Zelda will not be seen until an end goal is reached.

So effective is the writing here, that when I deviated from the main quest to collect insects or complete side-quests, I actually felt like I was wasting precious time to be catching up with Zelda.

Adventures really worth playing are becoming few and far between on the Wii (Ed: Apart from the recent Xenoblade Chronicles) and The Legend of Zelda: Skyward Sword makes up for that spectacularly.

The story finally takes centre stage amid a cast of fantastic and memorable characters. It's one of the best games this year on any platform and is reason enough to dust off the Wii, find batteries for the controllers and rekindle those old Wii Tennis muscle injuries.

You can support Chris by buying The Legend of Zelda: Skyward Sword