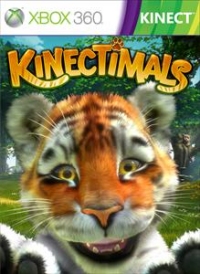 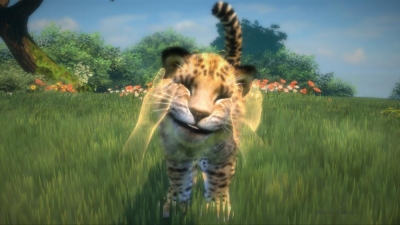 I know. Bumble just doesn't carry the same weight as God or Homer the Bard. Nevertheless, in Kinectimals, Bumble - our floating Bumble-Bee-ish Help-Desk - pops onto the screen at various intervals to provide young Kinectimal players with the nudge or information to get them to the next Level.

Turns out the goal of Kinectimals is to collect a posse of animals, train them up with skills like rolling and jumping, for which you earn points and coins (and you know I love a gold coin), and take them with you on your adventure around the island. Along the way, you can collect treasure to decorate your island hut, by looking through your Plunderscope and digging like the blazes when you see Stardust.

Training these cats involves a respectable amount of spinning and jumping, and not a small amount of lying on the floor with your limbs in the air. Players are not required to speak to their animals, but I would say you can expect a bit of general encouragement and coochy-cooing from your offspring as they wriggle around on their backs.

In what I'm starting to discover is true Kinect Style, the arm-swiping menus work extremely well for kids as they scroll through the Toy Box of activities. And the Toy Box proved extremely popular in my house. Choosing to wash a cat, for instance, allows you to either get busy with a sponge, or to aim your virtual water-hose at various other targets for points. Playing ball is a matter of throwing and deflecting the ball of your choice. (I'm fond of the beach-ball, FYI.)

Perhaps it's just the modern-day consumer version of Odysseus acquiring clothing and rafts, but in Kinectimals one's amassed wealth can be spent at the desert island shop. (We think it might be owned by the Limas, whose beach-combing activities appear to be quite lucrative.)

What concerned me was this: I've embarked on gaming with all the good will of a Rookie, and yet I found myself yawning on the couch as Ms12 (a devoted animal-lover) cooed and giggled at the writhing, bouncing antics of her fluffy feline friends. Cute, but an Odyssey this is not.

Indulge me for a moment - I'm a writer.

Indulge me for a moment - I'm a writer. With a kids' book we know it's going to end shortly. We're in control of the pace (within reason), we're in control of the nuances we add to the narrative voice. We bring an awful lot of ourselves to the telling. Bumble, bless him, does his job well, but he's well-lodged in the Top (AKA Barney) Level of World's Most Annoying Voices. I'd go so far as to say Winnie the Pooh, in his early CD-Rom Games incarnation, bore a similar trait.

But my overwhelming feeling about Kinectimals is that one's offspring could get lost in the Swamplands of Coochy-Coo for an infinite amount of time, where narrative seems to be lost. Meanwhile, I sit patiently watching Ms12 take her turn -- and The End slip further and further from view. Is this Gameplay? If so, do I want it?

I posed a question to the Universe not long ago and, quick as a wink, received a reply from That Voice from the Twitosphere.

Ah, Gameplay. Now that's something The Writer has yet to understand. Is it the Adventure? Is it the experience of being On the Road? Is it simply being lost in the Swamplands for a while? And where is narrative in all this? I suspect it's going to take a few more trips from the Isle of Fiction to the Mainland before things will start to make sense.

PS. The only thing Omniscient Bumble doesn't offer (unlike a real all-knowing narrator) is a status update on how you -- the player -- might be feeling. Probably for the best, under the circumstances.

You can support Libby by buying Kinectimals