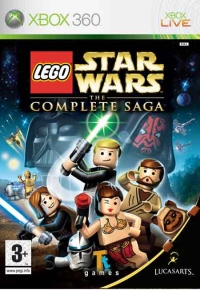 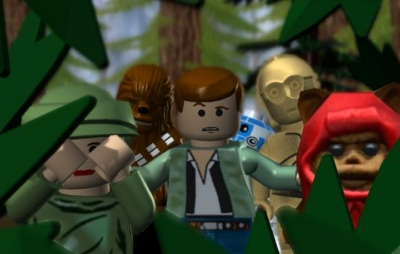 Star Wars is an Odyssey I will happily travel again and again. Real actors or Lego actors, terrible special effects or cool digital animation, cartoons, fan fic, whatever. I love it in all its incarnations. Lego Star Wars The Complete Saga on 360 was therefore right up my mythic street.

I will talk about character archetypes until you're asleep under the table; I'll quote the original script at every opportunity; I'll even wear Leia ear-muff-hair if required. I will never tire of this Odyssey.

I love it more when I can be a Lego Han Solo, and ten times as much as that when I can play 2-player, side-by-side with my own @Mr9. Because he has *absolutely no idea* of the epic journey he's travelling.

Don't I know this story?! It's lucky that on this particular Odyssey one's character can never truly die, because I was shot to smithereens several times by the time the real me had stopped dying of laughter.

@Mr9 wasn't at all impressed, because despite the fact that there's a seemingly endless supply of 'lives' (beating hearts in the corner of the screen), every time you die, you lose some of the coins you have been collecting. And in this world, hokey religions and ancient weapons are no match for a coin purse at your side.

Personally, I'm partial to a gold coin, so imagine my joy when I discovered that in this game you get to collect as many coins -- gold, silver and blue -- as you can possibly imagine, with minimum effort.

The goal is in fact to collect bricks. Bricks schmicks. For me it's all about the tinkle of coins every time either @Mr9 or I blast a roving camera on the Death Star, or destroyed a console, or an enemy, or other inconsequential scenery artifacts. I was somersaulting all over the place to suck 'em up.

But then @Mr9 turned on me -- me, his own side-kick (who incidentally Gave Him Life) -- in order to kill me repeatedly and collect my coins to add to his stash.

I'm sure if Odysseus had been travelling home by himself he'd have lasted 10 minutes, not 10 years. Or... maybe not. After all, what did they do, those men in his crew? They released the winds, ate lotus fruit, hunted sacred cattle and died in a shipwreck for their transgressions.

Hmm. What do I need @Mr9 for, again? Wouldn't I be better off playing Star Wars by myself? Wouldn't I reach the Ultimate Goal much faster?

Not really. I wasn't even sure what to do with the coins once I acquired them. I needed him to tell me.

Turns out you buy stuff. You show up at the Cantina bar in Mos Eisley and you choose stuff. You can unlock bits, buy bricks, buy characters... the list goes on. Just like the Star Wars story. In this version I've been told there are 36 story levels, 20 bounty hunter missions, and 6 bonus levels to unlock, and you have to collect 160 bricks across three levels.

I have no idea what that means. Neither does @Mr9, I suspect. But perhaps, after all, we're not a bad team: I have a nose for coin, he has the killer instinct. Together we'll have an adventure of sorts, even if we spend most of the time arguing among ourselves. Like Odysseus, it might take us 10 years to reach our goal. But it's probably going to be an interesting journey.