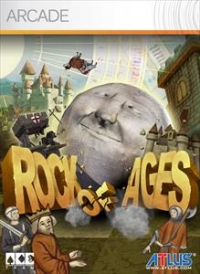 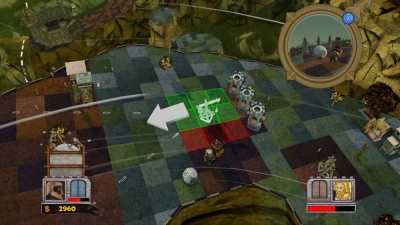 Rock of Ages is a fun Odyssey, as far as tower defense games go. It's one for history boffins -- as long as you don't mind balancing out your erudite and knowledgeable backlog of history and myth with a few solid displays of neanderthal testosterone. And the fact that you're essentially a boulder.

First of all, I was imagining an Odyssey of Biblical proportions (Rock of Ages being one of those phrases you associate with JC and his followers). It was not to be. The rock, bless its smiling face (really), is you. And you're the one constant through the various challenges faced along the journey through various ages in history. You are the main vehicle to reach that Ultimate Goal -- which is to bust through the doors of a temple at the far side of a battle-field.

Luckily, the Deus Ex Machina -- the hand of God, which happens to be Cronus in the first instance -- intervenes if you happen to careen off the edge of the plateau that your battle-field sits on. The Hand replaces you, gives you a new life, and you may continue merrily on your path of destruction. Thank the Gods for the Gods.

The first thing I noticed about Rock of Ages was the excellent graphics. Not because they were life-like or beautifully rendered, but because they were kind of like a visual gag cartoons designed to set the scene. At first, it's like watching the folk and creatures on a terra-cotta and black Grecian urn come to life -- all to the tune of santouri/bozouki-style ditties. And as you progress on your journey, the scenes adapt to match the time and place of your battle.

Like every good Odyssey, you cover lots of ground. A map shows you how far you have progressed across land and sea. I'm not sure about the Trying to get Home aspect, as is the real goal of an Odyssey, but -- as with Odysseus's journey -- there are myriad adventures to be had along the way, regardless of your destination.

The main obstacle I had to overcome was mastering the controller. It wasn't such a big deal when I was in Hades doing the simple Bowling-style course, but by the time I got to Sparta and I had to build proper defenses, things started getting a bit messier.

It's really my own problem; nothing for you to worry about. I just happen to be a bit challenged when I have to combine several manoeuvres simultaneously. I had to put in a fair slab of time in order to master the ability to co-ordinate the Zoom/Rotate View with the Move with the Jump, as well as working out how to strategically build my armoury and weaponry.

While I was working out whether I needed cows or towers, and where to put them (for instance), my opponent's boulder started rolling, leaving me very little time to work out what hidden skills a cow might have. Everything moves pretty fast once you're on the roll, and woe betide if you forget which constructions you're best off to avoid and which ones you should smash to smithereens.

Regardless, Rock of Ages is a bit of fun and, as long as you can get your fingers under control, it's a good rollercoaster of a ride. As for the Final Destination on this particular Odyssey, I can't say I even got near it, due to my ineptitude. But, as the Voice from Beyond reminded me:

Then again, I didn't need to be reminded I'm growing old whilst fretting about whether or not I'm going to be squashed by a cow. Repeatedly.

But -- let's face it -- it took Odysseus 20-odd years to make it back to Sparta, and more than a few times the team lost track of where they were going. I reckon this is vindication enough for me.

You can support Libby by buying Rock of Ages