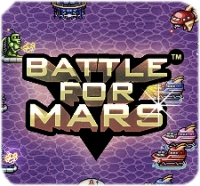 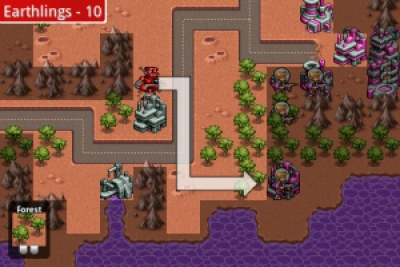 The Mars Odyssey has been with us for a very long time: since we first imagined space travel and adventures beyond the stars.

Now that we know Mars has no vegetation (remember this point, folks) and Martians would need to have evolved in a low atmospheric pressure in order to manage to keep their eyeballs in, we are perhaps a little less likely to believe there's anything much living out there.

Nonetheless, Martians are still the ubiquitous outer-spacian. When we say Martian, we mean 'other'. We are pitting ourselves against 'the other team'. And that's the case once again in Battle for Mars on Android.

Odysseus's Martians were probably the Trojans. Creatures from a place far away, who had a way of stealing other people's wives. Still, war is war, and Odysseus and his men used any tactics they could to overcome the Trojans, including hiding soldiers inside a gift -- the famous hollow Trojan Horse -- which enabled them to take the city from within.

Battle for Mars is not an Odyssey of such complexity. You are pitted against the Martians in a game reminiscent of chess. You make your move: they make theirs. And so-on. The problem being that the Martians are like bulldozers. They have the advantage right from the get-go: their Martian-making factory is better situated than the Earthlings' factory. They also seem to have inherent knowledge of how to obliterate opponents. Oh, wait, that's because they are a *program* and I, on the contrary, took about 20 minutes to work out how to mobilise my first guy.

On a basic level, this should be your thinking, for every move:

Just like chess (ed: and just like Advance Wars (DS)), you need to think ahead. You need to think where to place your troops and you need to know your troops' capabilities. But those Martians just keep coming. They spew forth out of the factory, like peas out of a pod, to defend their territory and blast the Earthlings. And they never, ever forget to move even one of their pieces.

In what are possibly the most humiliating cutaways I've had to endure, after every single turn, each Martian fighter gets their own special scene to enact the horrors of their recent moves.

These 'scenes', put together, can take a woefully long time as tiny, Elite Martian Soldiers blast the Regular Earthling Soldiers, Martian Tech-Bots massacre pitiful Earthling Mega-Bots, and so-on. I don't even know how those Martians score enough points to build so many new killing machines, and yet every turn reveals more. And more torturous viewing for me as I sit, helpless, watching my ill-placed, ill-equipped troops explode one after the other.

I'm sure if I could memorise the ranking I'd be better off.

Mars may have been the Roman god of war (Ares was his nearest Greek counterpart, fyi), but he was also the god of Agriculture.

Yes indeed. War and vegetables. A match made in heaven.

Martians, I say to you: eat your vegetation-less, Artichoke Hearts out. I will find a way to conquer, even if I have to stuff your capsicums with poisoned Tech-Bots and take your city from within.

You have been warned.

You can support Libby by buying Battle for Mars